Everybody welcome Catch Cover and Eskimo/Ion to Target Walleye/Ice! They make quality stuff ice-heads need — pumped to have them on board!

Walleye fishing for a six-figure payday.

The 23rd annual Vanity Cup took place over the weekend in Nipawin, SK. In all there’s over $300K paid out to the top teams — including a $100K check cut to 1st. This year, Ryan Wiebe and Cliff Warlow weighed in 36.7 lbs of Tobin Lake gold to take home the MASSIVE payday:

The water was high and dirty, but they were able to piece together the puzzle to get the right bites. Word is they caught their fish — including day 2’s biggest at 11.55 lbs — rigging leeches.

Leeches this time of year because Saskatchewan doesn’t allow fishing with live minnows…ever:

> The regs state: “Only baitfish that have been commercially frozen or preserved may be used.”

Imagine the bags those guys would haul in if they could drag around a big creek chub, redtail, or cisco! They’d somehow be lookin’ even heavier than Mickey Trudeau’s:

Must not allow cameras in SK either because we could only track down one actual fish pic from tourney day…but it’s a good one. This is why anglers fish Tobin — Manny Milas with a double digit slaunch from day 2:

The 2nd and 3rd place teams each took home a shiny new Lund boat. Sounds like they do payouts right up yonder, eh?!

TW subscriber Mel Cochrane and her main net man Rob Henry have been putting on a DD clinic lately. Their last trip out was no different:

> “We thought it was a sheephead at first the way it took line. Sure enough, it was a 10-lb plus walleye that smacked a #12 purpledescent Rapala Jointed Deep Husky Jerk.

> “We noticed a bass boat sit down just off a shoal that came up to 30′. Knowing they probably marked some smallies — which are feeding heavy right now — there was bound to be bait near by…which meant walleye too.

> “We trolled in from 160′ to 100′ and the bottom 8′ on the Humminbird Helix 9 was stacked THICK with bait. Right behind it we started marking some higher hooks. It wasn’t long and an Off Shore Tackle planer board flew back out of line and peeled drag!”

They got the end of the fight on video, along with Rob’s ninja-like skills on the net job:

TONS of great fish were weighed in at the Fishing To End Hunger Walleyedan tournament on Gull Lake, MN. Father/son sticks Butch and Nate Blasing (great guys!) took home the ‘W’ with their 21.41-lb bag for a cool $10K payday:

They caught their fish rigging big chubs but found they got more and bigger bites by tail hooking their minnows — versus dragging them pierced through the top lip:

> “As soon as the minnow quit swimming around we’d put a new one on — the bigger the better. We upsized to a #2 hook which greatly helped our hookups.

Interesting because most use a 3/4-oz or better weight for dragging chubs to keep them down in the strike zone, but not going to question their decision since they “Didn’t go more than 2 minutes all day without a fish.” Congrats guys!

Local guides Nick Miltimore and Bruce Meinz were nipping at their heels with 20.42 lbs, cashing a $7.5K big-boy check:

> “A variety of techniques worked in practice, but on tourney day all our fish wanted was rigged chubs. We kept it simple and found that a snell with just a hook was best.

> “Depending on the size of the chubs we used #2 all the way up to 2/0 octopus hooks. We were using 5-6′ snells with 1/2-oz walking sinkers. We experimented with longer snells up to 10′ as the day went on, but the 5-6′ proved to be the best for us. Also played with tail hooking, but all of the fish we weighed in came from a traditional lip hook.
> “Our key was having our fish found and getting them in the boat early. We knew the bite was going to get tougher as the day went on — when the fog/clouds lifted and the wind laid down…and it did.”

Here’s the part that makes tourney fishing a different kind of monster:

> “While getting our ‘unders’ in the boat we landed 2 fish between 20-21″. We had to decide [right then] if we wanted to put ’em in the livewell or not in a tournament where you can’t cull fish over 20”.

The top 20 teams weighed in 304-lbs of fish — which is a 16-lb average per bag! Gull Lake is one healthy looking creature. You can check out the full weigh-in results here.

Why Minnesooootans are a different breed.

While we were at the Gull Lake weigh-in, we couldn’t help but notice that things are done a little differently in central MN — but in a totally awesome way. Here’s a few of our favorite sights:

Weighmaster Mark Schutz took a break from the scales to shoot bow off the stage:

NPAA president Jimmy Bell did a little multi-tasking of his own:

Their phone cases match their jerseys (you pull it off Stephen!):

Side note: Butch has got to have one of the most impressive MN grown mustaches to have ever caught a walleye. Love it.

We all have those days…don’t worry, it happens to the pros too. Fortunately MN fishing guide Jason Durham is pretty quick on his (dry) toes:

> “I love my Minn Kota Ulterra, but this is what happens when you forget to turn the power on before you release your boat in the water.

One of the few times being lazy — and not putting away gear after a guide trip — will work to your advantage. Right Jason?? #LaunchLikeThePros

Maybe Friday. They’re tying up loose ends with the city councils of the locations — but they did leak one stop on their FB page:

> “I can confirm that we will be visiting Sandusky on April 12-13 of 2017 and the event will be hosted by Sawcreek Mill Resort.”

> “The walleye population is in serious decline, with the current population dominated by young fish.”

Some say closing the lake to ice fishing this season would kill the local industry.

> President of the lake association: “They’ll go broke. And when they do, the ON government should provide a subsidy similar to the (handout they gave to the) dairy farmers.”

BTW ‘bil.’ is short for BILLION…. Chump change for these heavy hitters:

They’re sort of just combining, and together will own 184 stores in the U.S. and CAN. It still needs to be approved by regulators and Cabela’s shareholders…who started this whole thing in the first place.

> “Fisheries work groups help improve discussion between citizens and the DNR. Group members can talk about angler points of view and fisheries issues in detail.”

6. The future of ice-fishing electronics.

Called the Marcum RT-9 and it’s the upgrade to upgrades (if money was no object). Has 3D mapping, a hi-def touch screen, UW camera module…you name it.

Can’t wait to try one out this ice season, but they are available to buy right now here.

For towing ice-shelters. No longer uses pins to connect to your snowmobile or ATV. Thank you from cold fingers everywhere!

We can’t wait to see those big greenbacks like this one Scott Brewer cracked last year:

How to catch walleyes in submerged wood.

Read the full Jim Edlund write-up here, but there’s a few excerpts below:

> “When Devils Lake guide Jason Mitchell goes on a big ‘eye hunt, he says there’s no better place than wood. That’s hardly a surprise, but what’s cool is how he catches ’em…by doctoring cranks to resist snagging, and swing ’em in the boat like bass.

> “I catch more big walleyes on deep-diving crankbaits crashing through the timber looking for big reaction bites,” he says. “But it’s not a numbers thing – it’s a big-fish thing.

> “Jason drops waypoints on shelter belts, old farmsteads and hills lined with brush that were once dry land.

> “Then I go out and survey with my electronics, looking for wood that creates the most shadowing on my SideScan screen. The more shadows, typically the more walleyes. Mix in a little rock, maybe weeds, and you’ve got a good spot. Typically the depth zone is 8-10 feet.”

– The 4th place team of O’Malley/Hughes ‘explaining’ how they caught their fish at the Fishing to End Hunger tourney on Gull Lake. Their 17.55-lb bag was just out of the money…must’ve been a sensitive subject lol.

Devin stuck his new PB with this 12.5-lb Saskatchewan butterball:

Caught while working over a point with Rapala Jigging Raps and the new Flat Rap. 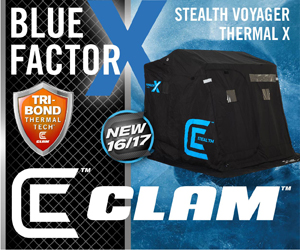 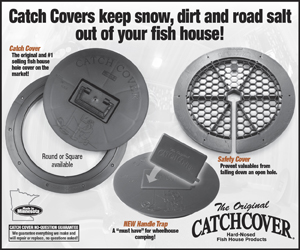