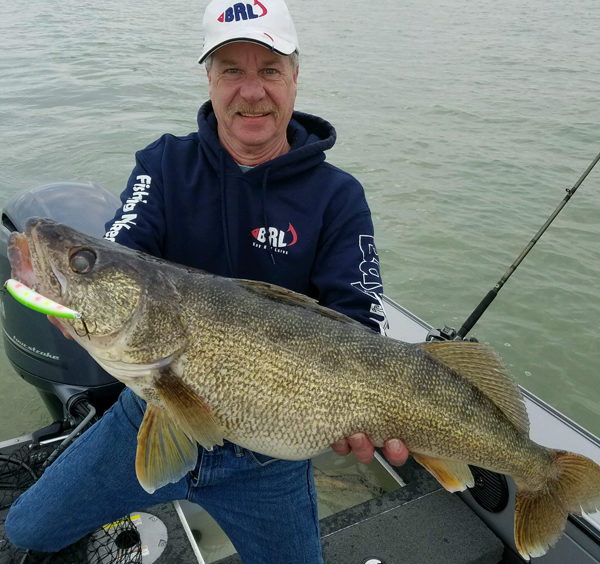 Water temps are rising and the bite on Lake Erie is heating up. Here’s how walleye-nut Brent Long  gets quickly dialed in on the post-spawn walleye bite:

> “I like Bay Rats Lures’ Long Extra Deep because of its wide and erratic action that attracts those hungry females. The LXD can be fished as deep as 27 ft without the use of snap weights or lead-core lines. It also has good action from 0.8 mph to 2.3 mph without blowing out.”

Dialing in the depth

> “When my graph shows fish suspended throughout the water column, I set my lures at different depths to find the most active fish.

> “When I catch a fish at a particular depth I start to adjust the other line lengths to the same — or near the same — depth range where the fish was caught.”

> “With the water temperature rising, the speed you troll at will typically rise also. Start out trolling at 1.5 to 1.6 mph and occasionally incorporate turns to one side or the other. The Off Shore Planer Board on the inside of the turn should nearly stall — while the outside board on the opposite side will run considerably faster than the 1.5 mph boat.

> “If a board on the inside of a turn goes back I know to slow down my trolling speed — if one of the boards on the outside of a turn picks up a fish I troll faster.

> “By using these methods to set my lures and vary my speed with turns, it helps me find the optimum speed and depth to run my Bay Rat Long Extra Deeps quickly and efficiently.”