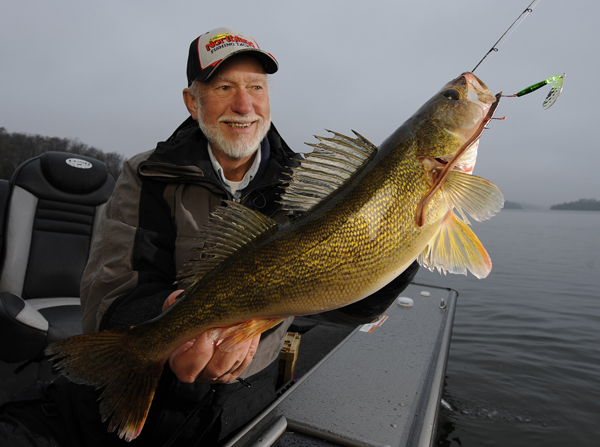 Tough to find someone who knows more about walleyes than Gary Roach, so I chased him down and asked him a few questions about how to catch walleyes now.

Jim: Gary, there’s a mayfly hatch going on in various parts of MN right now. What do you do to catch walleyes during this time each year?

Gary: It’s no big deal to me. I cut a crawler in half, and rig it so it slowly turns. You see those big clouds of bugs on your graph and sometimes walleyes will come up 25-30’ to hit a crawler, like on Winnie or Mille Lacs. There’s a lot of ways you can catch walleyes during a hatch. Don’t treat it like it’s the end of the world.

What have you been doing recently to catch fish?

The bite on Mille Lacs has been great. It’s been a long time since I’ve seen the walleyes this active. We’re catching them on jigs and minnows, silver shiner-pattern crankbaits, lots of stuff – right over the rockpiles, and also near shore chasing minnows and bugs. Fish out on the mud, too, in 26-37’.

The fish everywhere are fat and look like they’ve been eating just fine. Quite a few year classes present: 13-14”, 18-19”, 20” and big fish too. I don’t know where the DNR is putting their test nets, but it’s not anywhere near where I’m fishing, I can tell you that.

Another thing about Mille Lacs…anglers need to learn how to remove hooks from walleyes. If you’re rigging, you don’t have to feed them line forever. Set the hook on the second or third pull. But if the fish is deep-hooked, just look at how the hook is set and use your pliers to gently pull it back out the way it went in. Don’t yank it out. We haven’t seen any floating dead fish, so more anglers must be getting this when rigging live bait.

If you’re catching them deep, take your time to get them to the surface. They’ll develop problems just like a diver who ascends too quickly.

I’ve been finding walleyes in and around cabbage on a lot of MN’s natural lakes. Do you have any cabbage walleye tips?

In the old days we used to use 16-18’ cane poles for dipping walleyes out of the cabbage. You take a shiner or leech and drop it into the openings between the cabbage clumps. Now these spots are hard to find on a lot of lakes. The cabbage used to come up right above the surface with seeds. That was always a good sign.

A slip-bobber is probably the best approach. Set the bobber stop so the bait is 5-6’ down in these openings. Some big walleyes are in the cabbage.

I also like to slow-troll slip-bobbers along weed edges in 10-12’. I get the other guy in the boat as tight as possible to the weedline where he can work the edge by making short pitches right to the edge or pockets, and I may work a little farther out. We can cover a lot of ground.

Any recommendations for night walleye fishing?

You can catch a lot of walleyes at night trolling along the shores, casting around current areas (especially in the spring), but keep in mind that bugs feed most of the walleyes at night. I wait until fall to do my night fishing.

As summer progresses and walleyes move to offshore structure like humps and islands, any words of advice?

Always start on the windward side of the structure. That’s typically where the walleyes will be. Also, find the area with the sharpest drop. Those two things are critical.

I fished an island with a guy – the wind was coming out of the SE and we fished the SE side and caught fish. The wind switched on us to the NW, the graph screen went blank and the bite quit. We motored to the NW side and started catching fish again. The walleyes moved to that NW side even though the island was two or three blocks long.

A big thanks from Target Walleye, Gary!