Orange is the new black across much of the walleye world…. The saying, “the new black” comes from its use in the 1980s where the color black became a go-to for fashion designers looking for a versatile staple that could work with anything.

Similarly, the color orange and its various hues are becoming fashionable in my tackle boxes for a variety of predator species.

It started years ago for me with crayfish patterns being something I continued to choose as a confidence color no matter where I fished. For the most part, that included rocky river systems and their impoundments which did have an abundance of crustaceans.

Recently there have been increasing fishing reports that specifically call out orange as a “must-have” color. Manufacturers have responded, creating a number of new colors that are variations on the same riff. Here’s my take on the surge in popularity of those tones, and why you should look towards them, especially in certain systems.

A few winters ago, I talked to Josh Bullivant, avid angler, guide, and manager of Trapper’s Landing Lodge on Leech Lake. “Orange,” he said. “You need anything with Orange, and if your spoon doesn’t have it, on a tough bite you won’t get bit. It was that way this past summer with all of our jig fishing and now it’s carried into the winter.”

That statement seriously piqued my curiosity. Why Orange? That next summer, on a trip to Lake of the Woods’ Ontario side, I fished with famed guide Dan Schmidt to try out a few new lures and wrinkles on some reef fish. 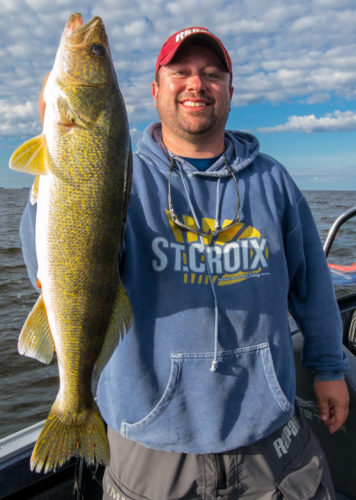 No matter where we fished, and no matter what depth, these fish were coughing up crayfish carcasses. Not just any crayfish, but the highly invasive rusty crayfish.

Bright, blaze orange shells and claws filled our livewell, and after draining and removing the fish, its contents looked more like the aftermath of a Louisiana crawfish boil than a fishing trip.

It wasn’t until we cleaned some fish and my kids fed some of the remains to the local pelicans that it started to click for me. One carcass was missed by the feathered brigade, and sitting in a foot or two of water, but I had to grab something on the boat before I could dispose of it.

After a few minutes I returned to see it gone. The pelicans had left, and upon a closer look, I realized that the carcass wasn’t missing…it was actually alive with more than a dozen crayfish completely covering and eating every square inch of it.

After getting a feeling for the volume of invasion for these exotics, and having ever since had smallmouth, walleye, pike, and even perch spew orange in the water, on the boat, and on my person, I’m convinced that fish species everywhere are increasingly choosing them as a preferred forage item.

The spread of rusty crayfish

Rusty crayfish are an exotic species that has invaded much of Minnesota, Wisconsin, Michigan, Illinois, and Ontario, while being present in portions of 17 other states.

Their spread is thought to be from anglers using them as bait. Their aggressive nature and vast reproduction success has them displacing native crayfish, eating the same invertebrates many minnow species eat, and reducing the amount and kinds of various aquatic plants.

Lake of the Woods natives tell me that the ever important cabbage growth has been severely impacted by the huge numbers of rusty’s, and other waters are seeing similar effects. Because of the risks associated with the spread of these species, it should come as no surprise that it’s illegal to release them into the wild and transfer them in any way.

While their ecological impact has been unfortunate and felt throughout the waters they infest, it’s had a drastic impact on the color selection process myself and other anglers go through on these same lakes and rivers.

New crankbait colors like “blaze,” “rusty,” “demon,” and “delta” are all getting at the same phenomenon of using crankbaits to imitate crayfish, specifically rusty crayfish. Historically, most crankbait styles and colors typically mimic a variety of minnow species.

Whether it be jigs, spoons, or any other artificial, the effect of these invasives on fish forage and ultimately fishing success has been drastic in the waters where they live.

Any bait sporting the color orange, fished near bottom or around rocks has the potential to be extremely effective given the expanse of the rusty crayfish’s spread. That goes for jigheads, plastics of various shapes, and even for spinner blades. 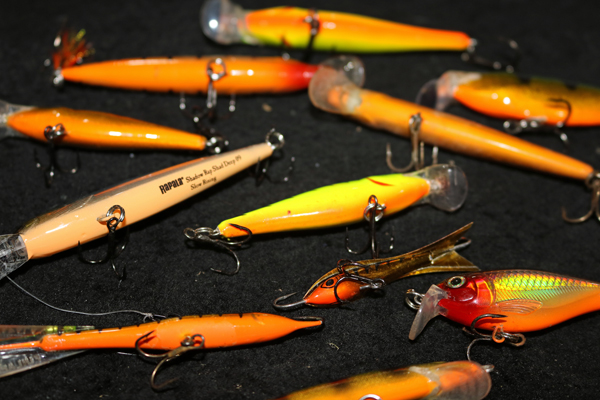 That said, the most important application of orange to any bait is in the crankbait category —  a lure type that scurries and searches along bottom much the same as a live crayfish does.

I’ve even seen fish movements of walleye and smallmouth directly correspond to shorelines and shallows that are more abundant with these crayfish species, making orange crankbait variations a solid choice whether trolling or casting.

A large number of Minnesota and Wisconsin lakes are affected, including regionally popular fisheries such as Mille Lacs, Leech, Winnie, Cass, Lake of the Woods, Rainy, Vermillion, and many more. Lists of infested waters are available on respective state’s DNR web-pages for more information.

As the unfortunate spread of these species is not likely to be halted anytime soon, keep orange, red, and various crayfish shapes and colors on your mind when you dig through the tackle box to tie on a bait.