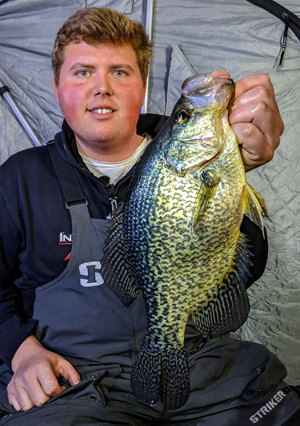 A pile of snow, ice and slush has made lake travel a nightmare this season. Without some sort of a track machine — even with one — “running and gunning” has been dang near impossible on many lakes.

The good news? Hunkering down in one spot can pay off BIG — especially when it comes to after-dark crappies.

We tracked down fish-head Konnor Kleist to get his take on the finicky mid-season bite. Might recognize him from his appearances on In-Depth Outdoors, like this episode where they waxed some monster night-bite slabs.

Guy spends a ton of time on the water — here’s how he’s getting it done right now:

> Konnor: “By mid-winter, most crappies have left shallow weeds and are roaming deeper stuff — making ’em tough to find during the day [tons of water to cover].

> “Instead of just plopping down in the middle of a basin, I’m looking for differences among stuff that’s mostly the same.

> “[Example] A steep break might run for a long way and be pretty much the same, but then makes an inside turn or jut out into a point — that’s what I’m looking for.” 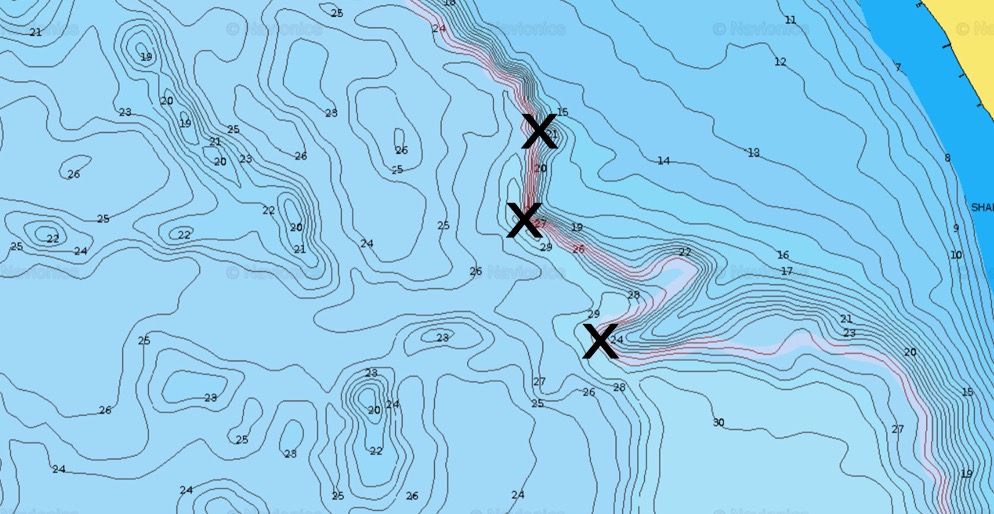 > “Technically I’m still fishing the basin (25′-30′) but the spot is close to something that has some variance.

> “This kind of night bite is best on lakes with good water clarity and bottom content (mud) that is conducive to zooplankton…the main forage source.

> “A lot of times fish will be tight to the bottom at dusk and start to rise up as the night goes on — following the bugs as they rise out of the mud.”

> “I like using loud/aggressive stuff to call in fish from a distance…#3 Rapala Ultra Light Rippin’ Raps and 1/16-oz VMC Tingler Spoons are heavy in my rotation.

> “For colors I like the ‘pink tiger UV’ — it’s amazing the difference the glow makes at night and the white/pink combo really stands out.”

> “On the Rippin’ Rap, I’ll run a few spikes on the rear trebles to weigh the back down just a touch and add a little scent — have to be careful not to overdo it or it’ll screw up the action.

> “It’s critical to run a dead-stick for this deal — a lot of times the more aggressive bait will bring fish into the zone, but they’ll shy away from actually eating.

> “I run a small tungsten jig/crappie minnow combo on a noodle rod instead of a traditional bobber set up — this makes adjusting the depth of the set-line way easier/quicker compared to adjusting a bobber stop every time.

> “You’ll get a feel of where in the water column fish are coming through as the night progresses — adjust the dead-stick as needed.

> “I like setting up the dead-stick at 45-degree angle in a rod holder or on the seat next to me so I can see the bites better.

> “Moon phase can play a big role…the best time is a full moon, but the waxing period approaching the full can be killer too.

> “Not to say that you can’t catch ’em during a new moon, but that big orb in the sky definitely helps fire up fish after dark.”