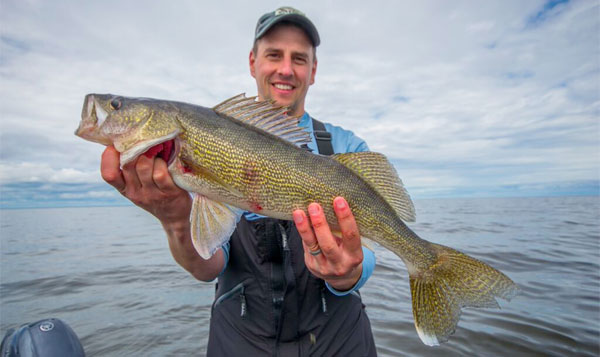 I just got back from a tough-bite on Lake of the Woods where active fish were few, and passing fronts were many. From long, soaking rains and big wind to sunburn-inducing high skies and flat water, we saw it all in the course of two days of fishing. Still, we caught a good number of fish, and our group even put some 28+” eyes on the board – just not the way I’m used to doing it.

I’ll be the first to admit that vertical jigging isn’t my favorite way of tempting a walleye out of the depths and into a landing net, but at times, it can be one of the most effective. I first learned this as a college-kid while fishing a Vilas County, WI lake known for great populations of eater fish and some true giants as well.

I was on a group of extremely stubborn mid-lake ‘eyes that would simply not eat anything that I drifted past a deep feeding shelf at the tip of a long rock/sand point. Trolling was illegal here, so crankbaits were out of the equation, and at that time I didn’t own any leadcore setups anyway. I could use a trolling motor to hold location however, so I did just that while dancing with the foot pedal to point windward and offer just enough speed to stay completely vertical. One by one I was able to pick off those fish until they scattered during mid-day.

What I was left with, along with some nice fillets, was a fallback confidence technique that I would employ for years to come whenever tough bites and groups of tightly schooled fish went hand-in-hand.

Your way or the fish’s way?

I get it.  You want to catch fish “your” way.  That may be long-lining weedlines at dark with Shad Raps, or maybe it’s drifting spinner/crawler combinations on windswept sand. No matter what our walleye-fishing background is, we all have bias.

The hard part is, we’re creatures of habit.  We fish the same lakes, during the same seasons, the same way as the year last, rarely deviating from the established norm.  We’re all guilty of it.  The best anglers in the world get stuck in a rut, repeatedly “zigging” when they should’ve “zagged” a long time ago. Walleyes are less predictable than many species, meaning that these lessons are hard-earned, as ol’ marble eyes more than any other freshwater predator will make you pay for fishing those memories.

Just like any method of fishing, some circumstances will dictate a good vertical bite, with lethargic fish being chief among them. When fish are unwilling to chase, perhaps the best way to “slow-it-down” is to put it in their face for prolonged periods of time.  This is especially true for live bait offerings, but also for more aggressive lures like a Jigging Rap, both of which coaxed fish this past weekend.

Fishing vertically also works best in deeper water, for a number of reasons. Deep fish graph well, and you can get a much better feel for how concentrated they are on a piece of structure.  It’s simply a much more efficient technique to drop directly on them when there’s a pile of them down there.

Fish from the depths are also less likely to be spooky to overhead boating traffic, meaning you can glide over the top of them unnoticed.  There are also times when other stationary methods like slip-bobbering don’t work as well, especially in big water with heavy swells.

Advances in trolling motors, fishing electronics, and other equipment make this an even more dependable technique these days. Rather than us dropping an anchor, paying line and hoping it holds, we lowered the bow mount and searched for fish, looking for active pods to drop on for 5- to 15-minute stretches.  When we found what we were looking for, we simply used the GPS-enabled anchor function on the trolling motor to auto adjust for direction and speed while it glued us to the spot.

Our electronics pointed out more than fish locations too – they indicated activity level and even helped us “watch” the strikes.  We looked primarily for any signs of life, especially fish that were belly off bottom, with our better fish being seen as high as 10 feet above deep mud in 30+ feet of water.

While jigging directly behind the boat and below the transducer, you’d see fish rise to your bait just like while fishing on ice with a flasher.  This was critical to catching the “high-riders,” and we saw times when it was the best way to get bit.

Ultra-sensitive rods, with braid and a fluoro leader, made aggressive bites feel like a shot in the arm, even from those depths.

All of these things, along with a trip down memory lane to regain some newfound confidence in the technique, helped us salvage a bite and keep catching fish no matter what weather we faced.