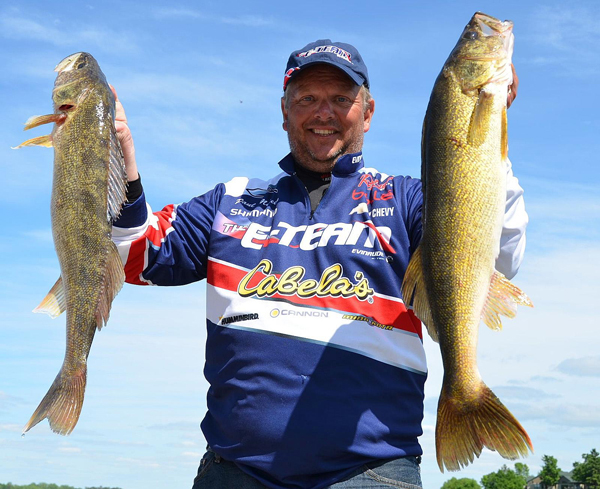 The National Walleye Tour will be on Green Bay in Door County, WI June 23-24. Fish should be easy to come by using a variety of techniques, including this one which a few pros know about but many anglers don’t.

Paul Meleen, 2010 FLW Walleye Tour Angler of the Year, owns The Lodge at Leathem Smith on Green Bay, which will be the headquarters for the NWT tournament. One of his favorite techniques this time of year centers on suspended fish.

He works “inside out.” He starts on the shallow, inside corners of points and islands. Then he works his way off the front end of structure over deep water, and keeps his bait at the same depth he caught walleyes at on the structure. Call ‘em front-end suspended walleyes.

Don’t fish below the thermocline

“Most anglers miss out because they fish in too small of a box,” he says. “For example, if they’re targeting suspended fish off structure — points or sunken islands — most fishermen assume that when they lose contact with aggressive fish feeding on top, it’s because the fish moved into deeper water.

“What actually happens in June, July and into August is those walleyes will maintain the same depth (say 20-25’) at which they were feeding, but move out over deeper water. They don’t move down. They will stay at a consistent traveling depth to conserve energy and intercept prey.”

Given that a well-defined thermocline has typically developed on most large bodies of water by mid-summer, this fish behavior shouldn’t come as a surprise. Still, many fishermen never consider that the water below the break is cold, holds little oxygen and is no place a walleye wants to be.

“Most guys will catch a few active fish on a deep point or sunken island, but immediately think they have to move down to the breakline when the action dies,” he says. “Instead, watch your electronics and move to the front end of the structure and out a good distance. More often than not, you’ll find pods of fish that move in and out from the structure to feed, and then rest at the same depth, suspended just above the thermocline.”

How he does it

Meleen starts his “inside-out” approach by moving the boat slowly over the windward side of the structure, dropping jig and live-bait combos to pick up aggressively-feeding walleyes.

When the action slows, he moves farther out, increasing boat speed to 1.0-1.5 mph and switching to a crawler harness or crankbait. He still fishes his baits at the depth walleyes were pinpointed at on the structure, over water as deep as 30′, 40′, even 100’.

To determine his presentation, Meleen looks at many things, including water temperature, where the forage base is in the water column, wind and sun explosure.

“I spend a lot of time pulling cranks. I’m a big Husky Jerk fan — glass and balsa Shad Raps too. At times I’ll use lead-core and floaters with rattles. I like Rapala products because if you’re fighting the elements and have two or three people in the boat, there’s no time to tune everybody’s crankbaits to run true. These baits are good to go right out of the box,” says Meleen.

“Today’s tournament approach has everybody focusing on the little humps that have one, two, three good fish on them. But the bigger pieces of structure may have several fish-holding spots: a little drop, sand and weed transitions, cups, etc. Then, where the structure drops off you can intercept both the walleyes that are leaving and the ones that are arriving to feed.

“You might have dozens of fish traveling in an out off the structure. Fish are on their own schedule. Working laterally out from the structure at the same depth gives you some additional opportunities.”