by Jim Edlund with Ted Takasaki

In his countless clinics and tournament appearances, legendary walleye pro Ted Takasaki says he’s asked thousands of anglers what they struggle with most on the water.

“Almost everybody wants to know how to control their boats in the wind,” says Takasaki. “Which is fair enough, boat control is one of the most critical concepts for any angler to master.”

Wind and walleyes go together like peanut butter and jelly, so goes the term “walleye chop.” There’s a good amount of biology that tells us why walleyes plus wind equals good fishing.

“Active fish often concentrate on the windy side of a lake where the food chain goes wild and walleyes can use their keen sight and lateral lines to their advantage,” says Takasaki.

“The wind breaks up light penetration as well. We’ve all seen it. The wind blows, we hammer fish — the wind stops, and so does the bite.” 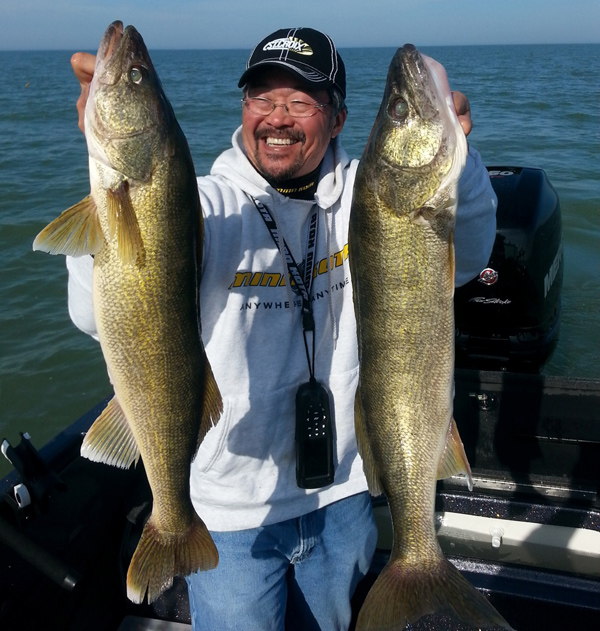 That being said, if you’re a serious walleye angler, the key is to learn boat control techniques that use the wind to your advantage.

Takasaki has mastered techniques to do just that over decades fighting Mother Nature’s worst from the Great Lakes to the Dakotas, where he now calls home. And if there’s one thing you can count on in the Dakotas, it’s wind.

But the problem really isn’t the wind in and of itself — it’s what the wind does to boat speed, direction, and keeping the boat at the correct depth.

“Walleyes can be selective and finicky. Like all predators, they’d rather their food come to them, as they instinctively reserve energy for growing and reproducing. They tend to avoid chasing lures or bait.

“As a result, more walleyes are typically caught when the boat is moving slower than 1.5 mph, but the wind typically moves a boat faster than you want it to go. Luckily, there are tools you can use to slow down.”

“In a slight breeze, position the bow into the wind in order to effectively work the contours of structure. When buying a boat, equip it with the most-powerful trolling motor and longest shaft you can afford. Minn Kota’s Terrova or Ulterra trolling motor is a great aid for walleye anglers.

“The i-Pilot feature allows you to set the direction you want to move the boat. It also has a feature called Spot-Lock, which turns your trolling motor into an electronic anchor that keeps the boat in one spot.

The i-Pilot Link feature follows LakeMaster contours on Humminbird sonar units with the simple press of a button.”

Fire up the kicker motor

Back-trolling with a gas tiller motor can offer even more control in stronger breezes. The trick there is to be subtle. “In this case, make minor adjustments in speed, not major ones,” says Takasaki.

For anglers in console steering-wheel boats, a gas-powered “kicker” motor gives you additional power in order to neutralize the wind speed. A bow-mounted electric motor can then be used with the gas kicker to steer side-to-side and keep your boat in position in a strong wind.

This is a boat-control technique that Takasaki uses nearly every day on the water. He’s expanded it into a concept that he calls “four-wheel drive trolling.” 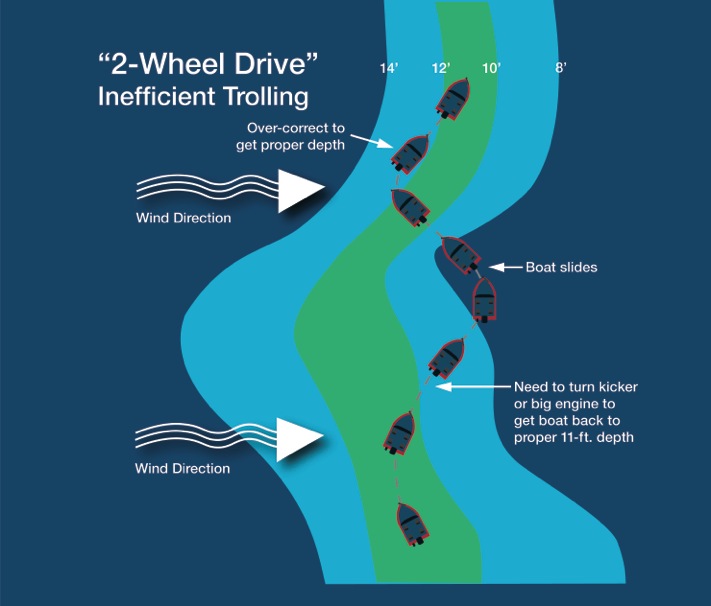 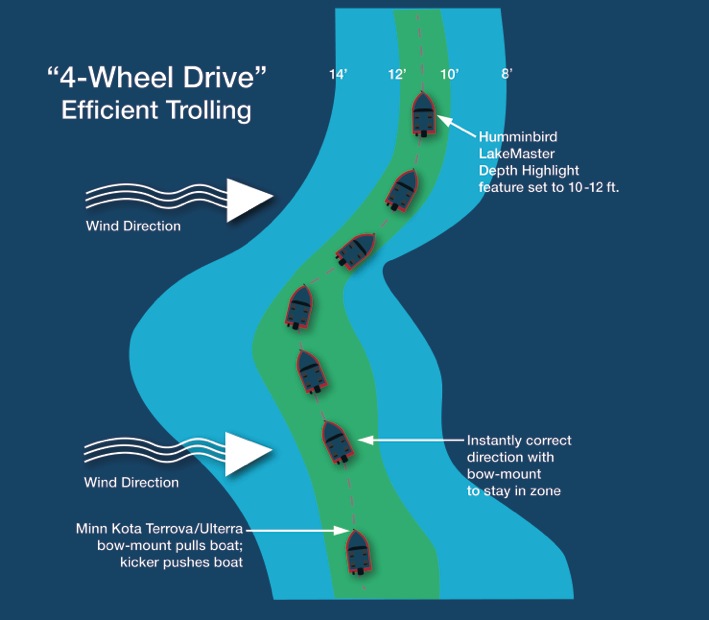 “When trolling, I’m using the Minn Kota Terrova or Ulterra in conjunction with the gas kicker. It’s a push/pull technique that’s similar to driving your vehicle in four-wheel drive. The boat is always more responsive when it’s controlled by the front, while being pushed from behind.

“This will show everything from 10-12′ in green. That gives me a visual reference of where to stay on my trolling path. I can also select that contour and run i-Pilot Link to keep me exactly on that 11′ contour.”

Being perfectly blunt, Takasaki says too many anglers connect their kicker to the big engine and steer with the wheel. What ends up happening is anglers aren’t able to stay on their trolling paths over fish-holding contours or structure, areas which are sometimes quite narrow.

“This would be the equivalent of driving a rear-wheel drive vehicle in the snow, where the car wants to slide when trying to turn. A boat does the same thing on the water when only propelled from the rear. As a result, anglers have a tough time keeping their baits in the strike zone,” says Takasaki.

A better way is to allow the bow-mount trolling motor to “pull” the boat simultaneous with “push” from the big engine or kicker in the rear. 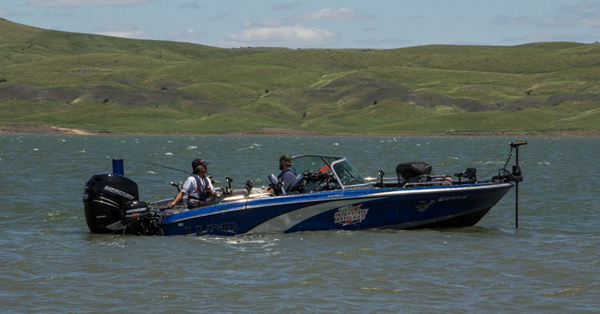 “Using the Minn Kota Terrova or Ulterra in conjunction with the kicker motor is like running a vehicle in four-wheel drive. Combine that with the Lakemaster mapping on my Humminbird units, and it’s really the only way to troll!”