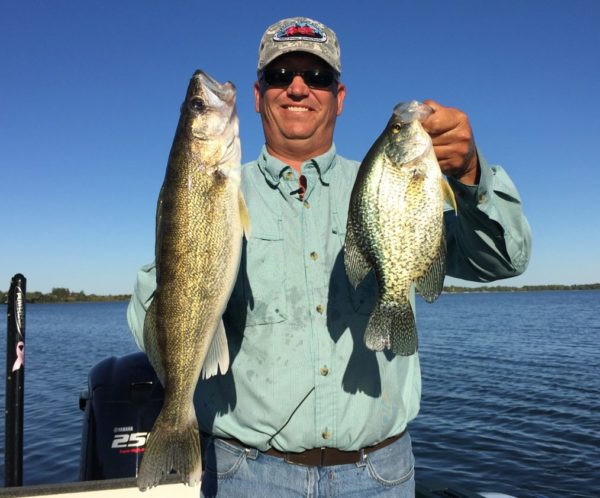 “The combination of still-green weeds and wind were a baitfish magnet.”

Some of early fall’s best (and overlooked) walleye fishing can happen in or near weeds. But not just any weeds — they have to be green — as in alive, and still producing oxygen and attracting baitfish. .

“We saw numerous boats working the deeper breaks and basin with spreads of cranks on boards. We decided to do something different and look shallower, primarily because we were shooting a multi-species show.”

Pennaz and guest Colonel Scott St. Sauver worked shallow flats for the first couple hours of the day with just one fish to show for it.

“And here’s what cool about digital mapping like Garmin’s Lake Vu. When I studied the areas that produced fish the similarities stood out, so I looked for other spots like it, including shoreline-connected areas.

“One stretch on the windward side of the lake broke quickly into deep water. We started pitching in that area and found still-green shallow grass — a mix of thin-bladed vegetation, coontail, and what I call ‘South Dakota cabbage’ in 8-12 feet.”

“Pitching down wind or directly into the wind was key. The current formed by the wind was moving the weeds around so casting parallel to the weeds cut down on hanging up.

Pennaz’ multi-species program involved throwing 2.5” Berkley Power Tubes, small swimbaits, and 4” Gulp! Minnows on 1/8- and 1/4-oz jigs. Soon he and St. Sauver were catching fish, each of the walleyes 20″ or better.

“Wasn’t just walleyes, either. We found a number of big crappies and bass in the same weeds. My guess is the combination of still-green weeds and wind were a baitfish magnet, a multi-species buffet.”

“The tendency in the post-summer and fall period is to head to deeper water, but don’t overlook whatever green weeds you can find — especially after turnover when water temperatures and oxygen levels equalize throughout the entire lake. There are times when walleyes can be found in ultra-shallow water and weeds, even during the day.”