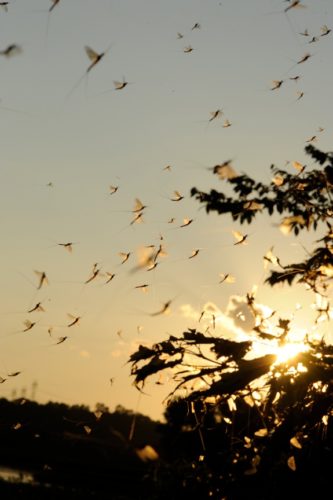 I can remember June days in the early to mid-’80s when the mayflies were so thick they literally covered the windows and doors of our bait shop across from West Battle Lake, MN. Business slowed a little bit, and anglers would complain: “No need fishing walleyes until it’s over.”

Technologically speaking, back then walleye fishing was far from where it is today. The first digital LCD fishfinders were just starting to appear and GPS was still a decade away. Flashers, paper graphs and paper maps ruled the scene.

But savvy anglers (like my dad) knew how to catch walleyes during the dreaded mayfly hatch and conveyed the tactics to his customers. Like downsizing to 4- or 6-lb mono and the use of small brown/gold/bronze jigs, splitshot rigs or one-blade spinner rigs tipped with a piece of crawler or small leech. Small Beetle Spins also flew off the pegboard.

> “On a lake like Mille Lacs, it’s key to know which flats have the biggest bug hatches. If I see clouds of bugs on my electronics I don’t even fish it. I’ll move to the gravel bars where they don’t hatch. Reefs like Sloppy Joe’s, Four Mile and Five Mile take off during a mayfly hatch.

> “I go for the reaction bites. Really, any time walleyes aren’t feeding I’m going for reaction bites with Jigging Raps, typically starting about 3 weeks after opener when the females are done resting from the spawn.” 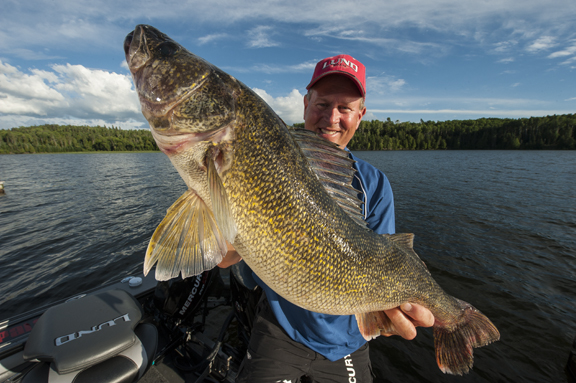 > “One of the things during a big hatch is go really light and run a stealth rig of nothing more than a splitshot and leech. I’ll either troll really slow or sit right on top of the fish with my Minn Kota Ulterra Spot-Lock electronic anchoring if there’s little wind.

> “The rig is simple: 4- or 6-lb Sufix Fluorocarbon with 32-38″ between a #4 VMC Octopus hook and the splitshot. Some guys will use a bronze or gold hook because it’s more the color of a mayfly. Not a big deal to me, but go with your confidence color. On the business end, I use a smaller leech like a medium or large to emulate the larvae coming off the bottom. No need for jumbo leeches. A slip-bobber isn’t a bad option either.

> “I’m either cranking or pulling spinners. I downsize blades and crankbaits, like going from Reef Runner 800s to Deep Little Rippers which are half the size. In terms of spinners, I drop one to two sizes in blades, like from #8 to #6, or #6 to #4 or all the way down to #3.

> “A lot of Great Lakes guys cast a spinner rig, fishing it like a Carolina rig — a few small brown, copper, bronze or yellow beads and a small hammered copper blade. But trying to get a bite through that buffet can be a chore. Me, I don’t want to match something that there’s 80 bazillion of. I do a 180. If I see a 5′ or 10′ wide band of larvae coming up from the bottom on my Humminbird, I move.