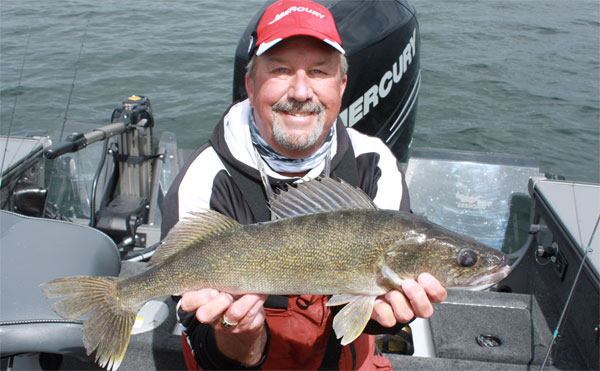 Although better-known for his walleye expertise on the natural lakes of northern MN, guide Tom Neustrom also knows a thing to two about how to fish rivers. Fact is, Neustrom’s early days were spent dissecting river walleye behavior in IL, WI and IA. And over the past couple decades he’s spent countless hours on rivers like the Rainy, upper Mississippi and smaller MN gems he’d prefer not to name.

“When it comes to early-season river walleyes, most anglers don’t put in enough time working holes,” he says. “Sure you can drift through a hole, but you’re better off taking some time and working it from different angles.”

For Neustrom, that involves dropping his Minn Kota Talon shallow-water anchor upstream from a hole and pitching jigs to the ‘upper lip’ of the hole where the current dumps in. “If I don’t get bit letting the jig tumble over the top lip, I move around the hole like a clock face, fishing it from three or four different positions, which can be done quickly with the electric shallow-water anchor.”

He says he had the reputation of an “anchoring fool” in the old days. “I used to do a lot of anchoring. I’d move the boat 30-40 yards upstream from a hole, drop a 30-lb Navy anchor and let out line until I could fish the hole’s upper lip. Then I graduated to the Richter anchor for its good grab. These days, I aim the boat downstream, press the button on my 12-foot Talon and work the whole area from the bow.”

When vertical jigging is key, Neustrom says he’s surprised by anglers not using their electric motors to slip the current. “The key is to adjust your bow- or transom-mount electric motor speed and jig weight to keep your line vertical on the downstream slip through holes. It presents the bait more naturally.”

Although he typically fishes main-channel holes during the early season, wash-out holes along inside bends can also produce. “The current runs a little stronger on inside bends, so I’ll get ahead of it before it hits the bend. There’s typically a wash-out hole. Again, concentrate on the upside.”

Neustrom also keeps his head on a swivel for in-flowing water like feeder creeks and storm drainage. “That current attracts food and the walleyes follow – like on the Rainy River and the creeks around Clementson during spring high water. A lot of times just below where the water’s dumping in there’s a wash-out hole that can produce a heck of a bite. Walleyes will lay there waiting for food.”

For confluence areas where dirty meets clean water – often referred to as “mud lines” – he likes to stay on the corners where the water’s a little cleaner. “I like to stay right on the seam where the muddy water hits the cleaner water. The walleyes will sit on the edge and ambush from the dirty-water side. If I’m going to fish a jig, I like to power-jig something a little beefier. Or I’ll run a horsehead-style jig with a belly spinner.”

But for 90% of early-season river situations, Neustrom is fishing 1/4- to 1/2-oz VMC Neon Moon Eye Jigs with live bait or a plastic minnow, paddletail or ringworm. “The key is a long-shank jig that lets me double-hook the minnow or thread the most amount of plastic. Try to keep your jigs as light as possible, depending on the current,” he adds.

When river current is especially swift, Neustrom concentrates on eddies and current seams. “I love fishing eddies. You get that reverse current, and walleyes will sit in there and just sift food. They don’t have to exert a lot of energy to eat.

“When the water is really cold, sometimes working the current seams and eddies is really important. Those fish will be waiting right there for a meal.”

When early-season walleyes are neutral to negative, Neustrom turns to a less aggressive approach in eddies, along seams and the edges of calm water. “Especially when walleyes are in a little shallower water, I’ll keep one rod rigged with 4- to 6-lb neutrally-buoyant Sufix Elite Monofilament and a light 1/32-, 1/16- or 1/8-oz jig and minnow.

“I’ll cast upstream along a seam or where a back eddy starts and let the current glide, roll and tumble the jig back. There’s something about how naturally the jig and minnow tumbles through the water column without any action of the rod. Sometimes walleyes that don’t want to bite will pick it up. It’s not a bite or strike – they just suck it in. Watch your rod tip or line, and carefully set the hook so you don’t break the line.”

For most river jigging situations, Neustrom uses 8- to 10-lb Sufix Castable Fluorocarbon on his spinning reels. “It has less stretch, a sinking quality for vertical fishing, and gives me better bite detection.

“But 832 Braid in 10-lb test/4-lb diameter with a 3-foot section of 8-lb fluoro is also a good set-up for most guys, especially when you’re pitching jigs. And unless the river is low and gin-clear, I don’t think line visibility is an issue to the fish, although it can be a big deal psychologically. In fact, high-vis orange and yellow lines can be a a good option for pitching plastics. Training yourself to watch your line jump and set the hook on reflex can help you put more fish in the boat.”