Looking for an adventure with some of your die-hard ice fishin’ buds? Two words: Lake Cascade. You’ve probably seen pics of the ridiculous [!] perch that come outta this central Idaho gem, but case you haven’t: 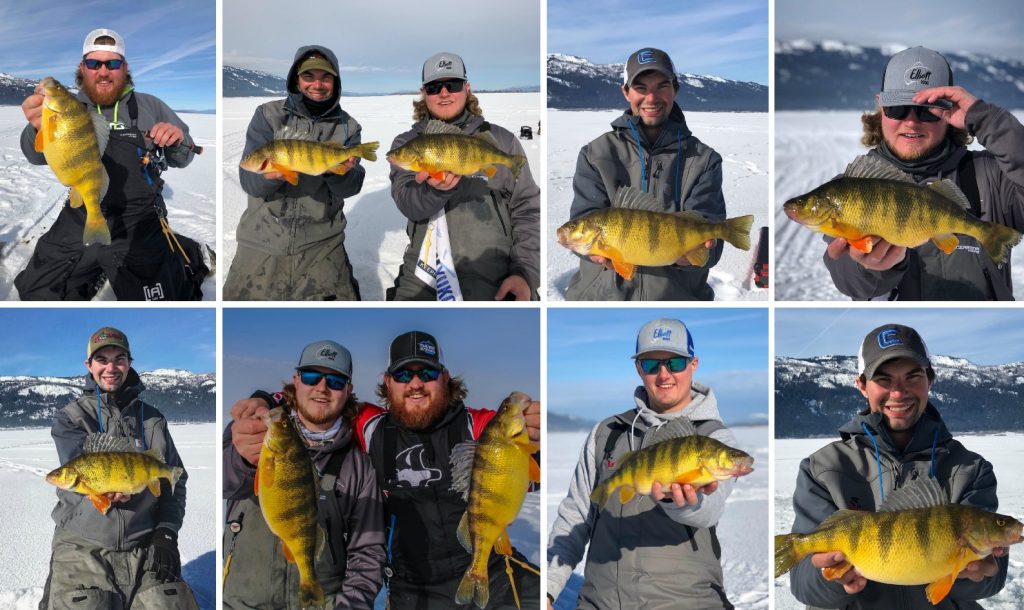 That’s the Team Yukon Outdoors crew putting the hammers down on a recent DIY roadtrip. We tracked down TYO’s Brent Relopez to get the scoop on planning a trip to the jumbo capitol o’ the west, without breaking the bank:

> Brent: “This was a trip I’ve wanted to make forever, and even though the drive seems daunting (21-ish hours from Minneapolis, MN) it was totally worth it. With that being said, you def want to plan it out right.”

> “Since this area is a big ski destination, there’s a lot of different cabin/house rental opportunities outside of hotels. I looked at a bunch of different rental sites [Airbbnb, VRBO, FlipKey, etc] before settling on a cabin rental in Donnelly…on the north side of the lake.

> “Price-wise, it wasn’t bad — if you look around enough you’ll find a good deal. We had a full kitchen in our rental so that helped keep food costs low for sure.

> “We rented for a week, which felt like the perfect amount of time to dial in the bite and actually have a little time to explore the area (outside of fishing) as well.

> “Since the area gets so much snow, trailering out a machine is a must (preferably tracked). We brought 2 snowmobiles.”

Lake Cascade isn’t small (47 sq mi) so where the heck does a guy start?

> “I had a little prior info from a buddy of mine who was out there a few years back, so we had an idea of where to fish, but ended up fishing new water every day.

> “It definitely doesn’t hurt to get a little local knowledge — Tackle Toms in Cascade was where we got all our bait.

> “We stuck to the north arm of the lake, which seemed to have the best fishing by the reports we got.

> “Honestly, it was kind of like fishing walleyes back in MN structure-wise. We fished shallow flats in the morning adjacent to deep water — would move out to deeper when the bite slowed down.

> “We caught big jumbos anywhere from 10′ all the way out to 36′. Shallow fish were tight to the bottom but as they moved deeper they suspended 8-10′ off.

> “Since it’s a reservoir, pay attention to old road beds and river channels on the topo maps — these served as travel lanes for fish midday as well.”

> “These fish are cannibals, so the best baits are (usually) ones that imitate small perch.

> “For rattlebaits, we fished #3 and #4 Rapala Ultra Light Rippin’ Raps in perch patterns, as well as a 1/8-oz Euro Tackle Z-Viber.

> “We did notice that some of the fish were puking up blood worms, so we also fished a tungsten jig tipped with a Clam Maki Bloodi plastic.

> “The jig/plastic combo was the deal when fish were in a more-negative feeding mood mid-day.

> “Can fish up to 5 lines per guy out there, so bringing some tip-ups along is a good idea. Can’t fish with live minnows, so you have to run ’em with waxies or something similar.”