Although pulling crawler harnesses on bottom-bouncers is effective during mid-summer, Brian Brosdahl isn’t a big fan of it:

“July and August are perfect for trolling crawler harnesses on bottom-bouncers along deeper breaks and over main-lake humps and islands, but there’s the whole issue with the hardware. Heavy rods, lead, all that.

“I have a lot of clients who’ve had wrist and back problems, and other physical issues. A guy with carpal tunnel is going to have a tough time dragging big lead. Plus, part of the fun is fighting the fish.”

Absolutely. Pulling bottom-bouncers, planer boards, and lead-core can be a snooze. Wouldn’t you rather catch walleyes with light line and a medium-light rod? I know I would. Guess that’s why I got excited about what Bro said next.

“I’ve been sharing this system with a lot of folks. Leave the bottom-bouncers, planer boards and lead-core in the rod lockers. Grab a couple medium-light spinning rods, a handful of 1/8-, 3/16-, and 1/4-oz jigheads, some curly-tail grubs and paddletails, and hairpin-style spinners, then hit the water. Maybe some crawlers, small leeches or fatheads for scent.

“That’s all you need. Then go out and fish like a kid.”

Bro attaches a clip-on hairpin-style spinner to a Northland Thumper, Whistler or RZ jighead, threads on a plastic, whips it a good distance behind the boat, and starts moving forward with his Minn Kota Ulterra bowmount trolling motor.

Okay, so it’s fishing like a kid with calculated boat control. He continues:

“The clip-on hairpin spinner is in every angler’s tacklebox and it turns any jighead, curly-tail grub or paddletail into a fish-catching machine. But for some reason, a lot of us haven’t fished it since we were a kid. Thing is – it worked then, and still works now.”

“Find out what the walleyes are eating and adjust according. I typically start with white, but keep firetiger, perch and crawfish colors on hand. But I probably fish white more than anything else.”

“If you’re trolling in open water, sure, you can add an 8- or 10-lb fluorocarbon leader, but I’m trolling these baits in and out of the weedy matrix where walleyes ain’t line shy. Also keeps from having to re-tie when the pike attack.”

Although the system works especially well on the lakes around Bro’s northern MN home – waters like Leech Lake, Winnie, Lake of the Woods and Devils Lake – he says it’ll work anywhere in the walleye belt.

“River guys are still trolling and pitching plastics on hairpin-style spinner and jighead combos. But for whatever reason, most of us have forgotten it works so well in lakes too.”

On natural lakes Bro ditches deeper mid-summer humps in favor of weed edges, weed tops (cabbage and coontail), sand grass flats and weed/rock transitions. “Might be August, but there are still fish shallow in the weeds. All comes down to food.” 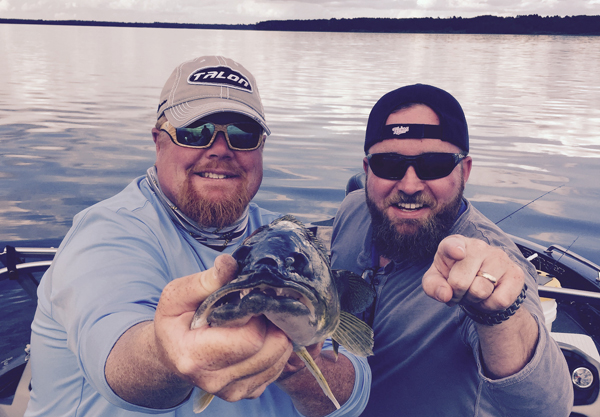 How to troll ’em

First thing Bro does is get the boat up to speed at 1.0-1.2 mph. He makes a cast behind the boat and starts covering water. For Bro, target depths can be 4-15′.

“Depending on depth, adjust how much line you have out. But that’s the beauty of the rig, especially on braid. The hairpin spinner is practically weedless and the braid helps slice salad, too.

“Ideally you want to be tickling the weed tops – and if you get snagged, rip the rod forward. Don’t be surprised if a walleye hammers it right after.”

“Keep in mind that in weedy or rocky areas walleyes will swim up a few feet to hit a presentation. You don’t have to be near bottom.

“You might want to slow down to 0.9 mph in cold-front situations, but even at that speed you should get some loft from a 1/8- or 3/16-oz hairspin combo when trolling in 8′-10′. In these same post-frontal conditions you can add some scent to up the odds. A fathead, half crawler or small leech can do magic.”

Once Bro starts catching fish he makes note of the depth and adjusts the LakeMaster Depth Highlight feature on his Humminbird HELIX 10 SI GPS.

He says another plus to trolling hairpin spinner/jighead combos (as opposed to a spinner harnesses) is quick response time.

“At 1.2 mph you have plenty of time to get right back in the zone without having to turn your boat around, so you can cover an area faster and more effectively.

“In these areas and this time of year, where there’s one walleye there’s typically a pod of several more, sometimes large schools.

“I can’t tell you how many times I’ve stopped the boat, hit the button on my Talon, and whacked fish for up to an hour or so with clients. It’s simply a matter of casting the bait out and slow-rolling back to the boat.”