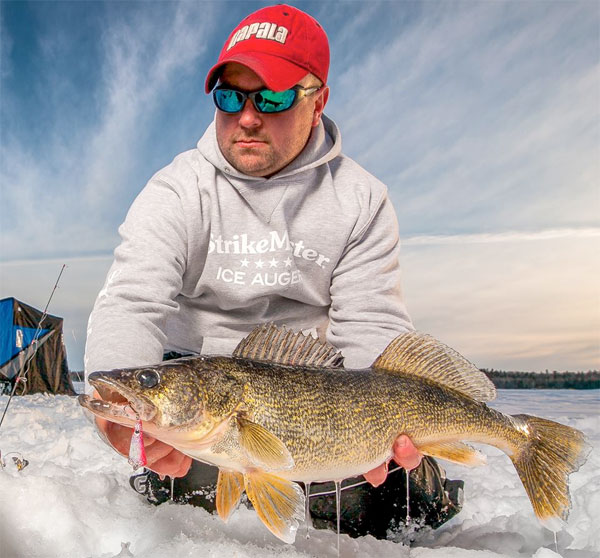 Right now we’re seeing some of the most lethargic fish of the winter.  That said, there’s still great fishing opportunities to be had.  We can’t control where fish are during the mid-winter period, but we can control where we fish – and with inactive and immobile fish comes the need to drill more holes and drop baits right on their nose.

However, even when fish are found, getting them to bite can be another problem.  That’s where timing comes in – and knowing that we can control when we fish.

For those of you who closely follow the weather, you already know the benefits of pre-frontal conditions as indicated by a stalled barometer just starting to make its plunge into the abyss. I’ve experienced great bites during long-lasting cold, high fronts during this time of the year as well, so you’re looking for a downward trending barometer or a fairly stable one.

Heavier snow cover during this time of year cuts down light levels and makes bite windows extremely important. You’ll want to be in a high-likelihood location at first and last light for most species this time of year. It very well may be the only crack you get at fish during this time period, so spend your daytime drilling and finding, but be ready to ride out locations towards dark.

Moving fish are a big deal this time of year.  You may not get them to commit on the initial offering, or even during that time of day, but lethargic walleyes will often still come to check out the commotion caused by noisy baits.

The Rippin’ Rap in a #4 or #5 calls fish from off to the sides, revealing the general number of eyes in an area within the first 15 minutes of fishing. With heavy snow cover and diminished light levels causing small bite windows, it’s imperative that you offer them the one-two punch of Rippin’ Raps with a nearby deadstick.

Think Jekyll/Hyde, with the high-vibration Rippin’ Rap racing aggressively and ringing the dinner bell, while the minimalist deadstick rod has a plain #4 octopus hook and tail-hooked shiner or fathead. Pin that minnow down with a split shot or two no more than 4 inches above the hook, such that it only has a short leash from which to struggle. That makes it a much easier snack should the Rippin’ Rap be shunned.

If the fish are so negative that they’re actually scared by aggressive baits and jigging, tone it down. You can still call fish from a distance with baits like the VMC Rattle Spoon.  These baits are favorites all winter, but when tipped with a minnow head, offer fish a bit of everything.  Just remember to have the dead offering nearby, so that any fish which passes on your jigging rod offering is forced to see live bait that can’t get away.