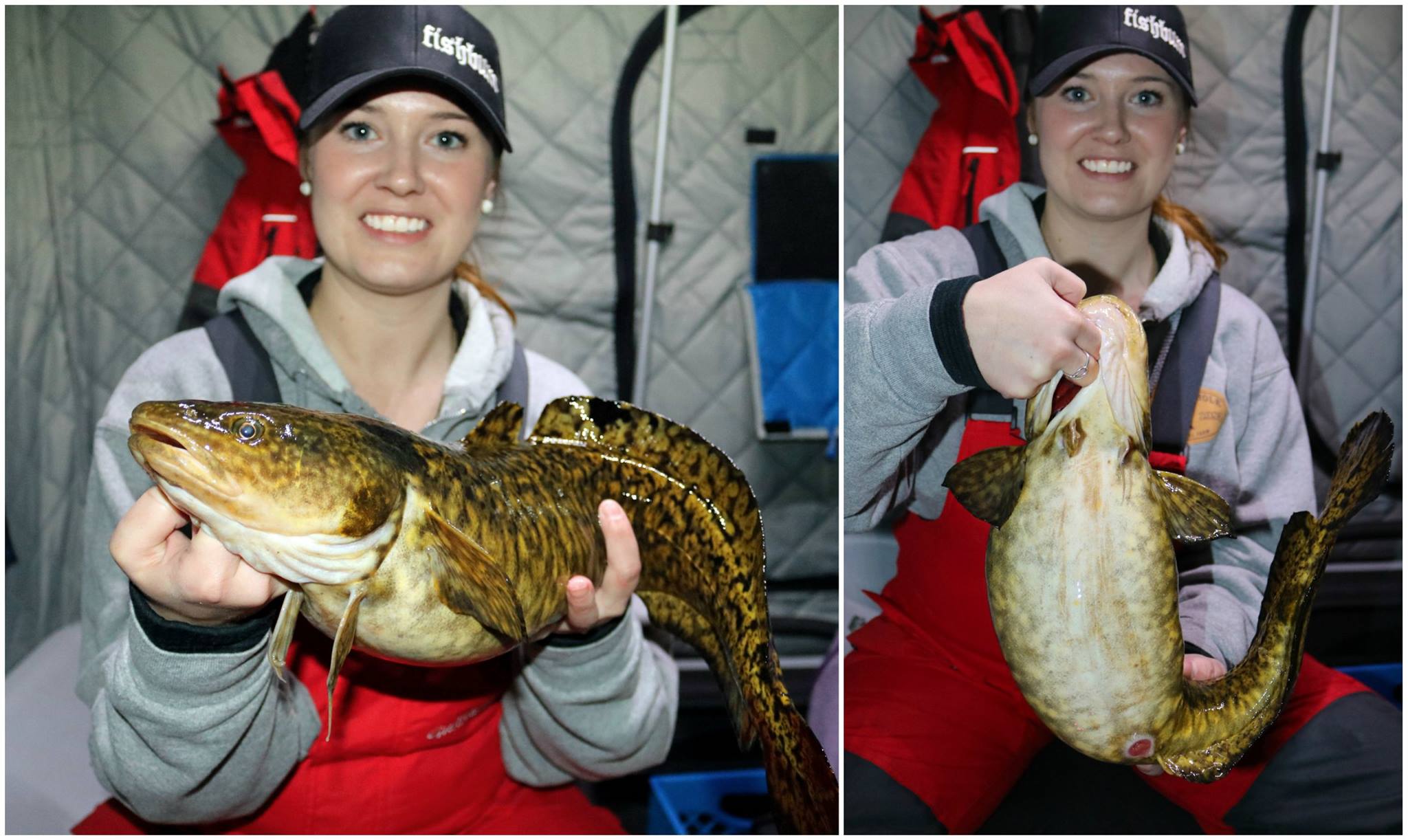 Ferocious, aggressive and awkwardly flexible, burbot are remarkable predators that have become my favorite species to target through the ice. The fight was what first got me hooked on this misunderstood water dragon — hook into just a schmedium-sized ‘pout and you’d swear you were pulling up a 27”+ walleye. The combination of their hefty guts and the rockstar-esque head banging is sure to slap a smile on even the burliest of beards.

For the love of burbot 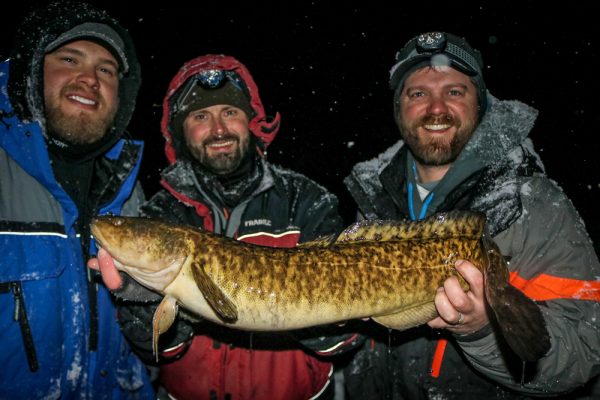 With a single whisker under its chin — just like I had up until my mid-twenties — I can’t see myself connecting with any other species of fish on a more personal level. I mean look how they rock that big belly with pride! If I could share bunk beds with one, I would  — swapping stories until we fell asleep, both dreaming of that next bacon cheeseburger…. Even our sleep schedules would line up as they’re the night owls of the fish community.

Never eat right before going to bed? Burbot ignore the advice from all of those fancy nutrition magazines, regularly opting for the late-night snack run instead. While you can catch the occasional ‘pout during the day, the prime bite occurs after dark and well into the night.

Where to find ‘em

Note: The type of structure may be a little different for some of our Canadian neighbors waaaay up yonder, but how/what we catch ’em on is much the same.

Hard, gravel-bottomed humps are king in late February and March when burbot spawn on bigger bodies of water. But don’t overlook deep weed edges at the bottom of steep breaklines — preferably off the edge of a large feeding flat. Burbot follow the food just like other predators.

Some of the best bites I’ve ever been on have been a mile away from any rocks, and those belly draggers would even come up the hole with mud stuck to their guts to prove it. These fish are there because the area offers a great late-night menu, and burbot aren’t afraid to hit up the drive-through more than once.

During daylight hours: Cruise the basin looking for water in the 40-60’ range near the deepest holes in the lake. These deep-water haunts may hold fish, but consider any fish caught during the daytime to be a bonus. The good news is that pinpointing these areas makes it easier to predict and follow their evening migration.

As the evening progresses: Slide up towards the base of the dropoff where the basin meets the bottom of the break. These areas will look like classic walleye structure, which is why you hear of so many ‘eye guys complaining about accidentally catching burbs. This breakline bite is usually best for the 1-2 hours past sunset.

After dark: Gradually work your way into shallower water until you’re fishing on top of the hump/flat that levels off in 10-20’. Focus on fishing the very edge of the top of the flat before it breaks off into deeper water. 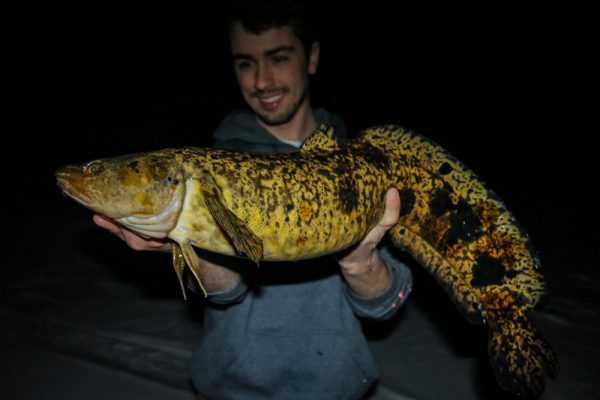 What to catch ‘em on

My go-to jigging spoon is called the Trout-N-Pout Spoon by Big Nasty Tackle, which are specifically designed for eelpout (yup, for real!). Years of banging them on the bottom and I still haven’t chipped the paint. They’ve got a super compact profile compared to their weight, which provides the perfect balance of bottom-pounding ability with the necessary flutter/wobble for enticing the picky biters. 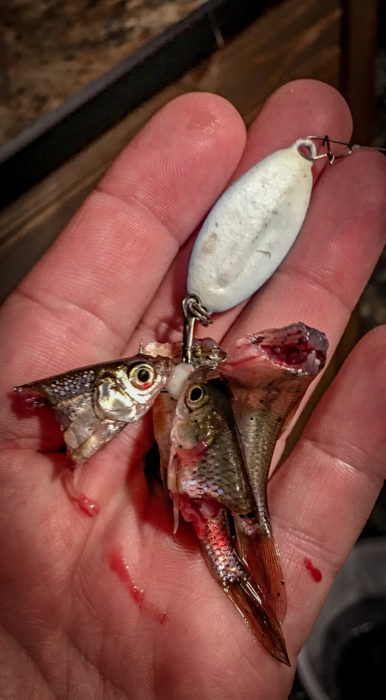 The majority of the time I prefer using the 5/8-oz size, but don’t be afraid to bump it up to 1-1/8 oz when fishing in deeper water…say 30-40ish feet or better. May sound ridiculously heavy, but that extra oomph allows you to pound the lake bottom to stir things up and call those nosy burbots in from a distance.

The brighter the better when it comes to burbot, and the Trout-N-Pout Spoons have the brightest, longest-lasting glow that I’ve found. Green glow is a tough color to beat. Still, I’ll reel up and re-glow my bait about every 10-15 minutes. Local ‘pout expert Jason Rylander put it best: “I have been playing with larger profile baits and having real nice success. Again glow is key, but these fish are not afraid to go after a big offering”.

These particular spoons also have built in rattles for added attraction. Tip ‘em with a matching pair of torn-in-half shiners or fatheads, and you’re in business — the business of burbot — which is an outstanding business to be in. Don’t be stingy on the minnows either. Pile ’em on and replace ’em often to make sure you’re getting as much scent into the water as possible.

There’s nothing wrong with the stock hooks on these spoons, but sometimes I’ll play around with swapping ’em out for a dressed- or glow-treble hook. The VMC Glow Resin Trebles have got a glow-in-the-dark infused epoxy resin that screams, “Bite me!” when it’s swinging back and forth in the water. They’re sticky sharp and stout enough to handle an angry burb throwing around its weight. But it’s that extra glow shining from the middle of the shiner heads that I feel gets me a few extra bites over the guy next to me.

Getting ’em to bite 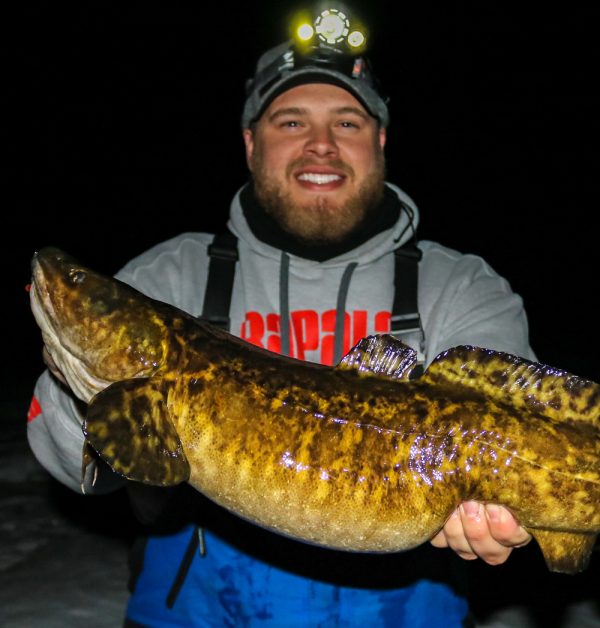 Burbot primarily feed tight to bottom. Skip the “5-second rule,” they don’t mind picking their dinner right up off the lake floor. I like to pound bottom several times to stir things up, then lift my spoon 6-12” off bottom and dance it in place for several seconds. This makes the glob of shiners do a tantalizing dance as they disperse scent and vibration into the water. Then I’ll do a larger lift of the rod tip at the end of the dance and let the bait crash back down into bottom before starting over.

You won’t always graph ‘em, often times your rod will load up as you go to lift your presentation off bottom. Still, you need to make sure to keep a close eye on your flasher. Some of your bigger bites could come through as a large, active blob 3-6′ off bottom, and would pounce on a glob of shiners raised up and placed in front of their face.

It used to be very common to see the random burbot lying slaughtered on the ice, frozen and wasted. This is an illegal act, one of which is very ignorant and frowned upon with any species, and eelpout are no different. Never leave a man behind.

They provide exceptional table fare! Boiled or deep fried, burbot are known as the “poor man’s lobster” for a reason. If you’re not going to take the time to clean what you catch, let it go for another person to enjoy the epic battle that ‘pout offer. I realize there is no limit on burbot, but let’s practice selective harvest. Keep the smaller males if possible and let those big ladies swim. Approximately 20% of a big females weight is thanks to her eggs. That’s a lot of baby burbs!

Respect the ‘pout. You’re sure to gain a newfound appreciation for these leopard-printed hand bags with shoulders after hooking up with one. Sit back, enjoy the ride, and hope your drag is set accordingly. 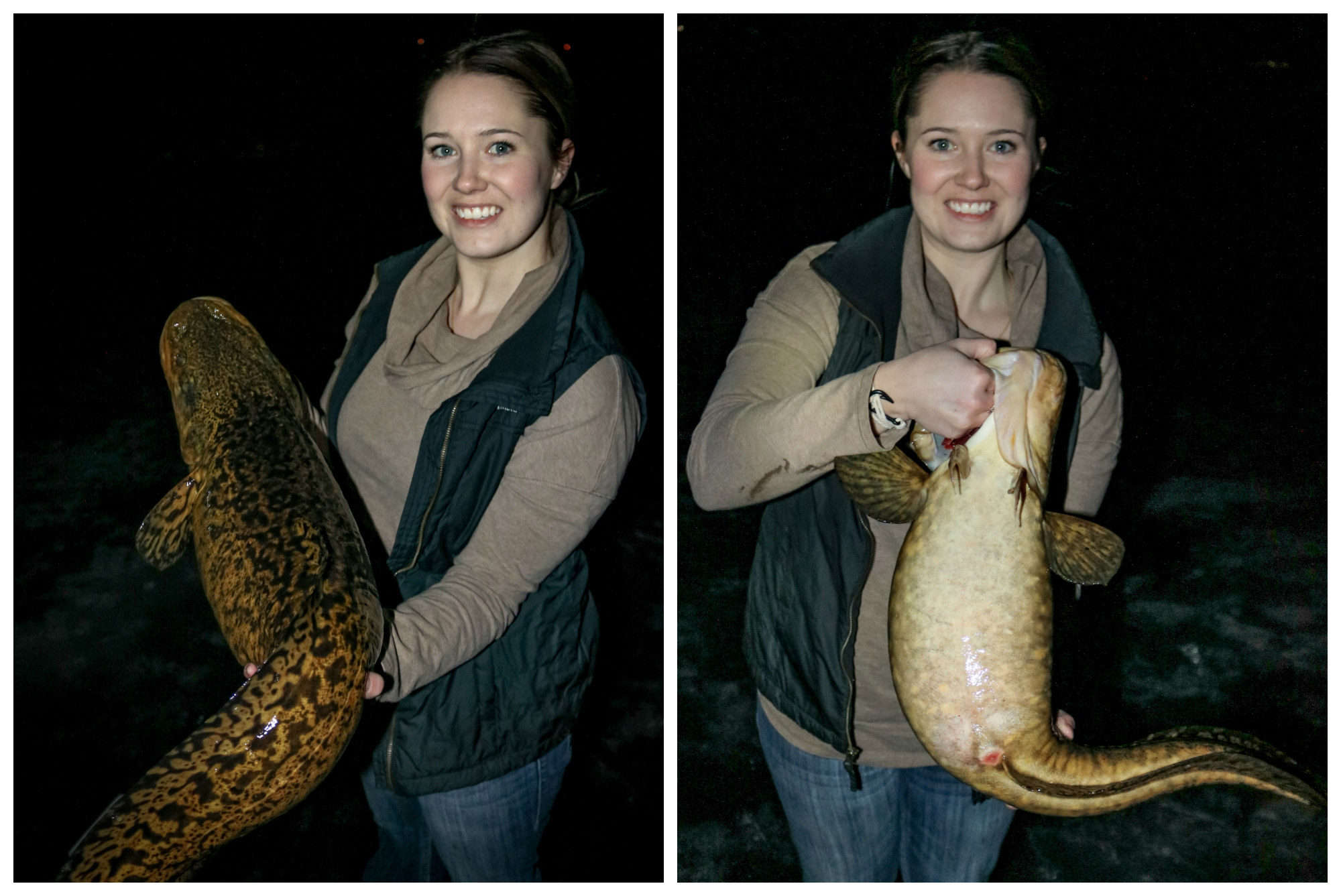 For you visual learners! Everything you need to know about hardwater burbs:

Best spring walleye baits and techniques
Special Issue: Early-season walleye locations and presentations
To Top
We use cookies to ensure that we give you the best experience on our website. If you continue to use this site we will assume that you are happy with it. Cookie settingsACCEPT
Privacy & Cookies Policy