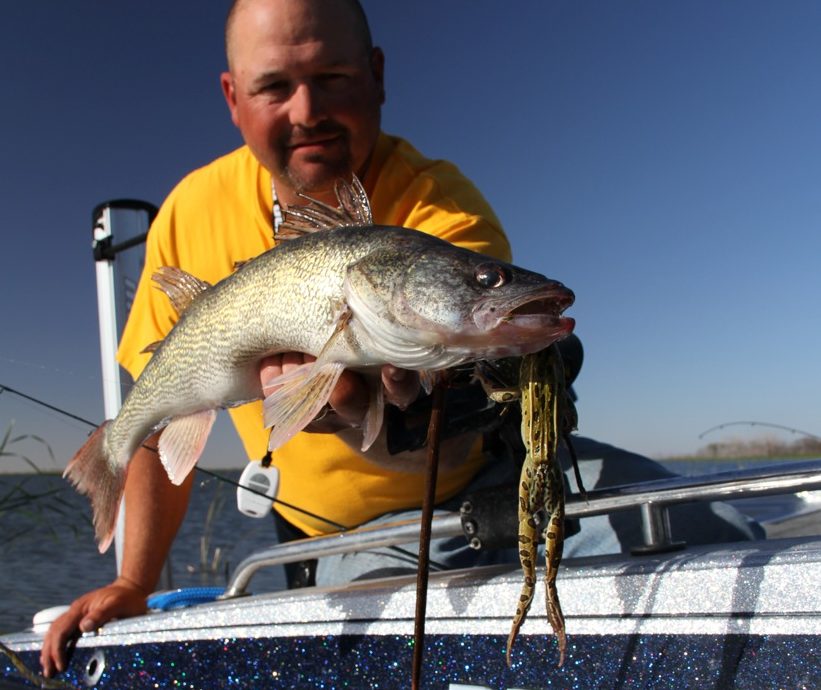 Think bass have a monopoly on frogs? Think again: https://www.youtube.com/watch?v=DVtH2fmMVkU

Each fall armies of leopard frogs migrate from woodlands to water where they burrow into soft bottom for winter. In many waters across country, walleyes will position themselves just a few feet from shore to intercept this easy, protein-packed meal.

Where legal, use of a spotlight can often reveal hundreds of shining eyes in skinny, marshy water, areas you wouldn’t normally associate with fall walleye fishing. Fact is, on many September and October nights across the Midwest, there are countless miles of unexploited shorelines lined with walleyes waiting for the kill.

I first experienced the annual frog migration/walleye connection as a kid. My dad and his buddies would shoulder a gunny sack of frogs and set up camp on the north end of a lake just outside of town. Over a few beers and bologna sandwiches they’d swap stories around a campfire, watching the tips of long fiberglass rods planted into improvised rod holders.

The rigs weren’t rocket science: a hook, a 10- 12” mono leader, barrel swivel, and a 3/8- to 1/2-oz egg sinker. Sometimes the fish were close to shore, other times a bit farther out. Duck hunting waders made it easier to get additional casting distance and land big walleyes.

Like fall shore walleye fishing in general, froggin’ for fall walleyes has fallen under the radar in today’s high-tech world — which is really too bad, it’s a heck of a good time.

Drive around your area and keep your head on a swivel for large groups of frogs crossing the road. Chances are they’re headed toward water… and if there are walleyes in those waters, that’s a good place to start.

Areas to investigate include bays of larger lakes, river backwaters, and shorelines only a road crossing away from wetlands mixed with woods or pasture land.

As Devils Lake guide Jason Feldner shares in the video above, Devils Lake, ND  has a good frog-walleye bite that old-school anglers have kept on the down-low for years. The same deal applies to countless other lakes in the Dakotas and west-central MN.

> Jason: “I typically look for cattail areas, which have a softer bottom and is where frogs are going to hibernate. If you see frogs crossing the road towards water, just follow them.

> “As far as the night fishing goes, fishing a couple days before or after the full moon is hard to beat.”

Feldner’s main live frog set-ups include a Lindy-style live bait rig or a jig head w/stinger hook combo, each fished on 8-lb mono. The first approach is set-it-and-forget-it — the jig head set-up is fan-casted and worked back to the shore or boat in a slow jigging or swimming fashion.

> “I hook the frog through the top lip only, sometimes with a weedless-style hook so the frog can still breathe but stays impaled to the hook.”

Jason says the biggest thing about fishing frogs either way is knowing when to set the hook.

Here’s more good news—not only are some beast walleyes caught each fall by anglers fishing the frog migration, but massive pike too.