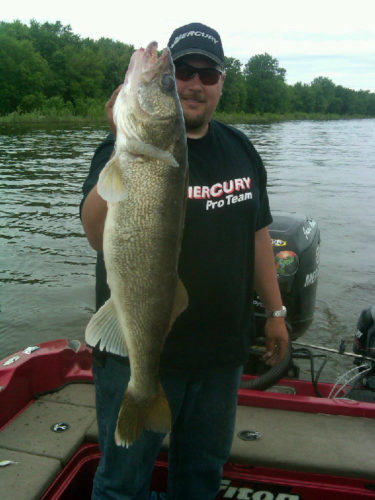 Love ‘em or hate ‘em, carp are found in most midwestern walleye waters. Considered a nuisance by most, guys like Green Bay’s Jason Muche (Walleye Adventure Guide Service) and Pat Kalmerton (Wolf Pack Adventures) have been following spawning carp in order to catch more walleyes – especially on Wisconsin’s Lake Winnebago and the Fox and Wolf rivers. But the pattern can produce walleyes wherever carp and walleyes share the same waters.

For a long time this shallow-water technique was known to only a few tournament pros and guides, who naturally kept the non-traditional approach secret. Pioneer walleye fishing pro Mike McClelland won a few major tournaments on this pattern years ago, and is generally credited with introducing it to the masses.

Though tournament anglers caught on (especially in WI), carp-spawn walleyes are still off most anglers’ radar.

“Carp will spawn over a wide temperature range,” says Muche. “From year-to-year, it could be any time from May through the end of June, in water temps from 63 to nearly 80 degrees.”

Thousands of carp migrate to the spawning shallows each spring, and walleyes have learned that following them means an easy meal. The trick is to find those spawn-friendly spots.

Muche: “On calm days I’ll look for the carp (and walleyes) in the shallow-water coontail clumps. You’ll see the fish boiling and the water muddied up pretty good. When it’s windy, I’ll concentrate on rocky and sandy areas which seem to bring in more baitfish.”

No one’s really sure whether walleyes feed on drifting carp eggs, scavenge disturbed baitfish or eat items the carp dislodge from the bottom as they fan nests. It’s probably all of the above, which explains why a few different presentations have their time and place.

For Muche, that means fishing a Watsit jig, a size 5 Shadling or a Rattlin’ Rogue on 6-lb superline with a fluoro leader, making long casts so as not to spook the shallow walleyes.

“I’ll cast a jig to the far side of spawning carp and slowly hop it back right through them. With the cranks, I’ll try to fish the outsides of the group to prevent snagging up. A move-stop-move-stop retrieve can be key.”

Kalmerton has a slightly different approach. “I’ll cast a slip float rig right into the spawning fish. Typically it’s a 1/16- to 1/4-oz pink/white/silver Flu-Flu or Gum-Ball jig and leech on 6-lb fluoro.”

But “when the carp aren’t really disturbing the bottom – just circling around, with baitfish moving in and out to grab wayward eggs – that’s when the cranks really knock ‘em dead,” he says.

He goes to a silver/black back Husky Jerk or a #5 Shad Rap, and steps up line choice to 8-pound fluoro.