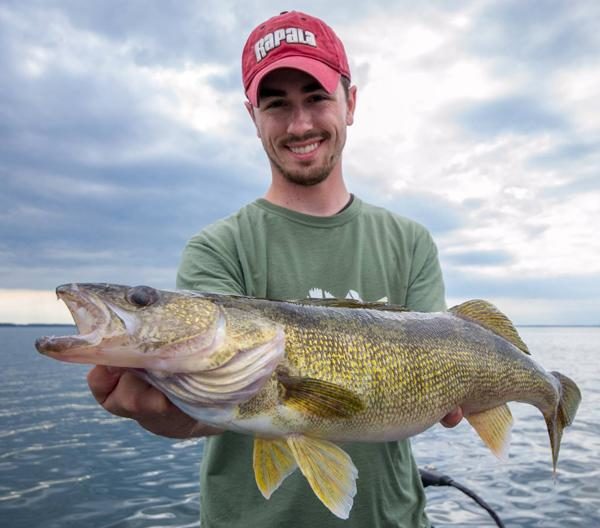 [Note: This isn’t a comprehensive list, but a list of some great stickbaits that you maybe haven’t seen/tried yet. Even the walleyes know that cranks like Rapala Original Floaters would be on a list all by themselves!]

There’s no better way to cover water and hit active fish than by trolling or fancasting crankbaits. Slender stickbaits are the most common-profile crank in the walleye world. Their erratic action  forces a reaction bite even when fish are being fussy. So put that minnow bucket down – here are 9 must-have stickbaits that’ll help you catch walleyes under any conditions, on any body of water.

A “must have” in any walleye nut’s arsenal. The Shadow Rap Shad will kick nearly 180 degrees right then left — with very little forward travel — keeping it in the strike zone a good long time. It’s also weighted to slowly rise on the pause, JUST LIKE a dying baitfish.

How tasty does THAT look? Livetarget’s “BaitBall” technology mimics a small group of fish that have been separated from the school. That stretched-out crowd of baitfish creates a pile o’ flash points designed to grab the fish’s attention. #ShimmyShimmyYa

This walleye hand grenade weighs nearly twice as much (!) as other stickbaits of the same length…it’s a stout 1/2-oz at just 3.75” long. No more getting wind-blocked or tearing your rotator cuff while making long casts to shallow-water fish. It’s also super buoyant, making it a killer option for aggressive fish, and does a great job at backing out of cover like rocks and timber.

Finally a scatter lip that can be trolled deep. You ever seen baitfish swim in a straight line? The Scatter Rap Deep Husky Jerk doesn’t either…. Super-erratic, and asks to get t-boned by a rock-opotamus.

Ever heard of painting a crankbait from the inside out? The inside of the Bagley Rumble B is sprayed with a chrome paint — when they open it up to put the rattles in — which gives it a glow-like iridescence. It’s also got a concave lip that rolls the bait on the troll.

Finally a crankbait you can troll as deep as 27′ without the use of snap weights or leadcore lines! Maintains a wide, erratic action at super-slow speeds, yet can be burned at 2.5 mph without blowing out. FishUSA has it in nearly 80 different patterns!

That oversized deep-diving lip lets you hit 20’ when trolled, and runs 10’ on the cast. Each is hand-tuned and tank-tested to swim perfectly right out of the box — even at super-fast speeds. The tuned internal rattle chamber is like ringing the dinner bell for those big females.

“Salmon guys” hate that they can’t keep the walleyes off of these lol. Won’t tangle your lines when trolling deep like some other deep divers on the market that did NOT make this list….  Great bill shape/design that let’s you bump bottom without snagging — even when things are a bit uneven down under. And those bright UV finishes are #money.