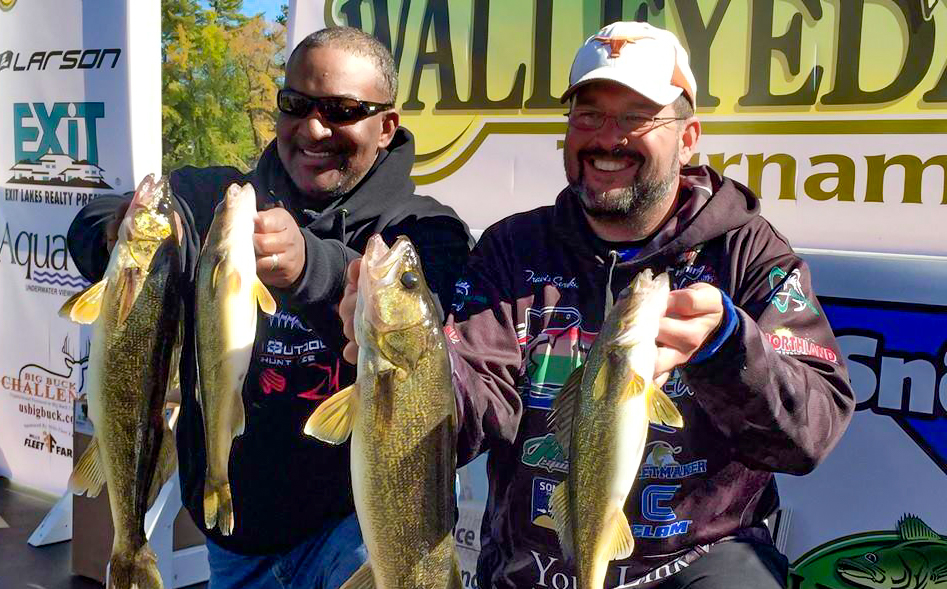 by Travis Sorokie and Brett McComas

Live-bait rigging with giant creek chubs and redtails is one of the best ways to snag a trophy fall walleye. When I say giant, I mean dragging around minnows up to 10” long, but most commonly in the 4-6” range. The bite’s just heating up now and should be phenomenal for a few more weeks.

You can catch fish all year doing this, but I really get excited for the big-minnow bite once the water has cooled down to 62 degrees…ideally 58-60. It stays good until temps hit 45 or so…after that the fish have already fed heavy for a couple of weeks and are now transitioning to winter patterns. You can still catch ‘em, just not nearly as many.

This time of year I hit the water as soon as I can be out there — especially in clear-water lakes. You’ll have your best shot at sticking a big fish during the typical low-light periods. Later in the fall you can sleep in [or get yard work done in the morning lol]. The bite will pick up later in the day after the water has a chance to warm up, and they’ll continue to bite all day.

Many weeds start to die off when the water temps drop below 68 degrees. That’s why you’ll notice piles of weeds floating around out there. A lot of the baitfish have pulled out of those dying weeds and are now schooled up in open water. The wind positions the baitfish on structure and the fish follow.

Pay attention to which direction the wind has been blowing from in the days leading up to your trip. Even fishing in deep water such as 35-50’ the fish will still typically be stacked on the windblown sides of underwater points, bars and breaks.

My rigging set-ups are 7’ medium-power rods with Pflueger reels. I’ll spool them with #6 smoke FireLine for my main line and tie on a 36-42” mono leader. The shorter leader allows the minnows to swim freely, while still keeping them in the strike zone.

Lighter leaders will absolutely get you more bites in clear water. Would say 6-lb test is probably the best all-around size, but you’d be surprised how many times I’ll drop down to a 4-lb leader [!] when fishing big, pressured fish that have seen it all.

On the business end of things you’ll want either a #1 or #2 Daiichi red hook (depending on minnow size). The red hook is a confidence thing for me…feel it gets me more bites. Pierce the minnow through its upper lip and it’ll stay alive for hours — or until the fish get to it.

One small key to my set-up is adding a red bead between my sinker and swivel. It adds a tiny bit of color and gives off a rattling sound when the bead and sinker hit. It also helps to protect your knot so you won’t need to retie as often.

Walleye prefer a larger minnow in the fall when the water temps are on the drop. It’s the 4-7″ redtails and creek chubs that seem to work best most days, but sometimes even bigger.

Why creek chubs and redtails? Because they’re hardy minnows that will often swim right along with the boat. There’s times you’ll actually feel them ‘getting excited’ down there the moment before a walleye smacks them.

You can catch the occasional fish on a sucker minnow, but they’re usually too lethargic for this technique and will end up being drug behind the boat [versus lively darting from side to side.]

I run a 1/2- to 1-oz egg sinker depending on minnow size, wind and depth. The 3/4-oz seems to be good all around, but I bump up to a 1-oz anytime I’m fishing 30’ or deeper. The bigger sinker also helps to anchor that minnow and keep it in the strike zone.

Egg sinkers because they’re super dense for their size and work perfect for this application. I’m not dragging them on bottom, I’m trying to fish the sinker like a jig — keeping it 6-18” off bottom and as vertical as possible. Occasionally drop it down to tap bottom and raise it back up.

Trolling between 0.3-0.8 mph covers most scenarios for pulling big minnows in the fall. When it’s calmer I’ll start off on the slow end of that to stay right over the tops of fish. If the wind is blowing there will be a current that seems to get everything moving down there [on the bottom] — that’s when I’ll pick up the speed. 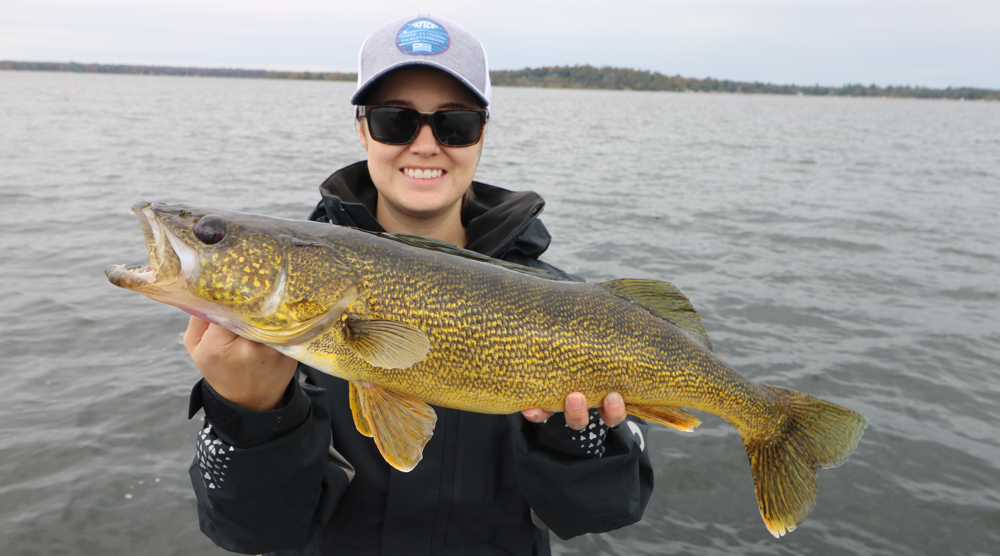 Don’t set the hook too soon

When I’m pulling big 5-7” minnows I’ll drop the line as soon as I feel a hit and point the rod tip straight back — that way the fish feels as little resistance as possible [when pulling line out].

I start out giving them a 25-30 second count before I set the hook. It will seem like forever before you get used to it. I’ll even wait 35-40 seconds on days that they’re sluggish. That gives them more time to turn that minnow around in their mouth after they t-bone it.

A lot of guys do a low sweeping hookset, but I pick up the slack and set the hook straight up vertically. It helps to drive the hook right into the roof of its mouth. I feel it gives me a better hook-up percentage and lose less fish that I do have on.

I like tail-hooking chubs with a longer 5-7’ leader when the fish are a little more aggressive and feeding. The minnows struggle so much more when you tail hook ‘em — can actually feel that redtail get nervous and try to get away when a fish is near.

That’s when I’ll sometimes open my bail up and let the minnow go for 10 seconds…stop the line with my finger to feel if a walleye picked it up…lot of times they’ll chase the minnow down and smoke it.

Also find I have a better hook-up ratio when tail-hooking big minnows. Fish are gonna hit the chubs head first…so that hook is already in a good position to hook the fish in the top of the mouth…don’t need to let them take it as long when setting the hook.

Tends to work best when sitting right on top of fish or barely crawling along…otherwise the chubs will die more quickly from being pulled backwards. 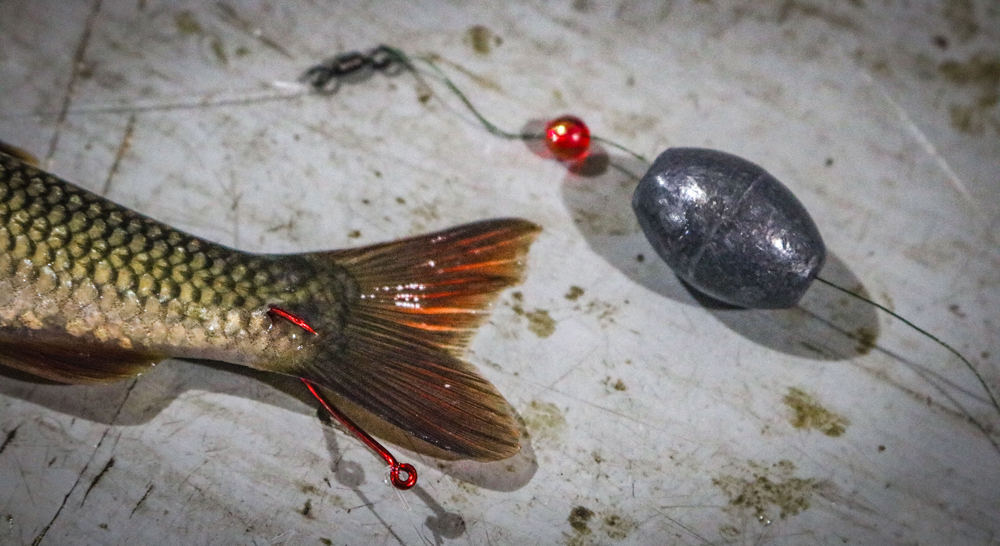 Lot of folks hopped on the braided-line bandwagon and never left…BUT there’s times when mono can out-produce, out-catch and out-kick braid’s butt (lol).

Video Update: For you visual learners 🍿

Here’s a video breakdown of my complete chubbin’ program (locations, gear, tweaks, etc) and some specifics to the tail-hooking trick that have saved my last couple of trips from picky biters. 👊 Hope you dig it!

Want to see more stuff like this? Sign up for the FREE Target Walleye emails — packed full of fishy goodness and sent straight to your inbox twice a week: