We’ve come a long way from those wooden jiggle sticks your grandpappy used to use in the darkhouse…handlining in panish next to a wood-burning stove. Nothing wrong with that [!] but if you’re looking to up your game, there’s a pile of new options for hardwater reels.

So what’s best: Spinning or new-school inline reels? We picked the brains of a couple diehard ice-heads to get their scoop on the benefits of each: 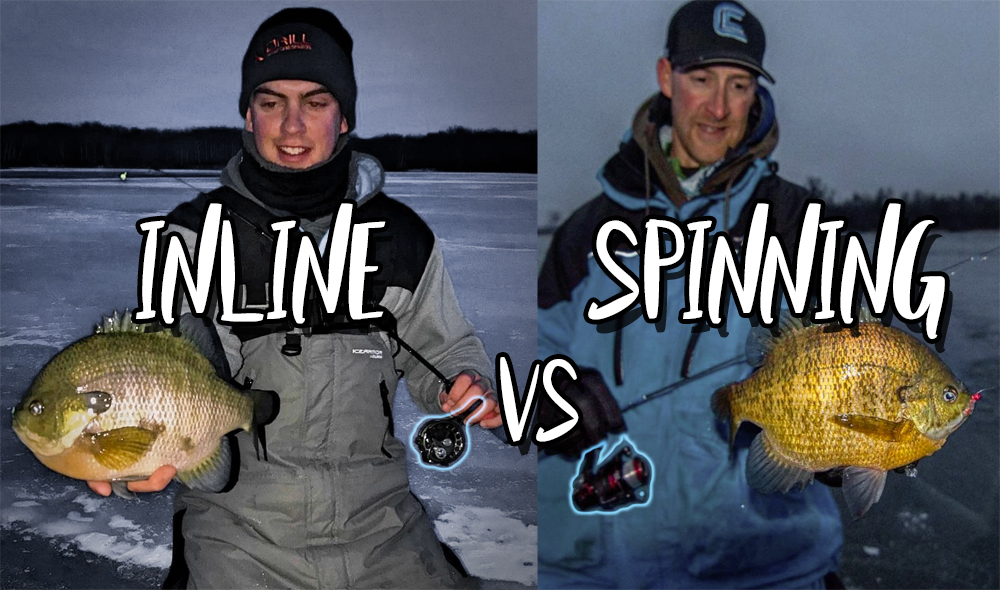 There’s a reason many old-school guys stick with spinning gear for big panfish: It’s worked for YEARS! Big-pannie wizard John Hoyer is one of those fellas who loves him some spinning gear on ice, so we tracked him down to get his take on it all:

> John: “Part of the reason I like spinning reels is the way I hold the rod…I pistol grip, so the longer stem of a spinning reel makes it easier to dial-in that snappy cadence I like.

> “Big bull ‘gills pull hard…having a quality drag is everything. I run a lot of the same high-end spinning reels — size 10 Abu Garcia Revos — I use in the summer [for panfish] on my ice rods.”

Bonus points for getting a reel you can use all year round….

A constant knock on spinning reels is line twist — Hoyer has a cheap and easy way to combat it:

> “I’ll change line A LOT throughout the winter, but I’ll just swap out 50’ or so at a time and connect ‘em with a joiner knot.

> “A little thing I do is put a small piece of tape over the joiner knot so the line doesn’t get caught when dropping onto fish.”

Essentially the little brother of fly reels, inline reels give ice-heads a big spool that spits line out end-over-end. Biggest plus is its ability to reduce line twist and memory…so your bait isn’t doing the “circle of death” and spooking off that 10″ ‘gill.

Fish-head Adam Bartusek is a new-school ice junkie who exclusively rocks inline reels for panfish. What he had to say below:

> Adam: “Having jig control on the drop is big for me. On the inlines I use, you pull the line out…so if you see a solid suspended mark on the way down you can stop your jig on a dime.

> “On some of the pressured lakes I fish in the metro, dropping too fast passed fish can spook ‘em…an inline slows me down in a good way.”

Old-school inlines featured a 1:1 gear ratio, but a lot of new ones have beefed-up gear systems. Adam’s go-to — the Clam Ice Spooler Elite — has a 2:3:1 ratio. This is a huuuuge plus, especially if you’re fishing over deep water for BIG basin dwellers.

Similar to John, Adam has a unique way of gripping his reels: He opts for a more over-the-top grip…keeping a finger on the blank at all times.