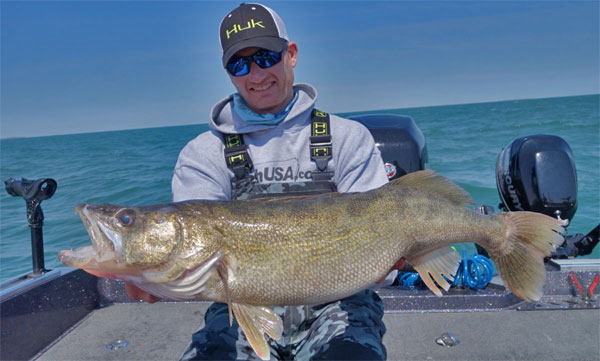 Lake Erie guide Capt. Ross Robertson is killing us with his giant walleye photos, fish he affectionately refers to “cafeteria moms” [lol no offense!]. So we gave Ross a call and asked him to spill the beans on the program that’s working right now.

The winning game is finesse-trolling stickbaits with snap-weights using planer boards. He’s specifically targeting fish that have been overlooked in the past.

“Given weather trends, I’m finding fish right on the bottom in 20-30′ adjacent to spawning areas,” he says. “In the past we wouldn’t have even targeted these fish because they’re neutral, so we’d go after the suspended fish. But for whatever reason, on average our big walleyes have been deeper the past couple years.”

Robertson says right now is prime time for anyone who knows how to pull crankbaits – like anglers comfortable with large spreads on big water, or leadcore crankin’ on river systems. But here’s the deal: It’s finesse game where +/- 0.1 mph can make or break the bite.

“Pull your cranks like you’d pull spinners. Don’t run your kicker – use your electric. I’m trolling with the Minn Kota Ulterra on the bow, running 0.8 to 1.2 mph at maximum with slight turns and bouncing in the chop. Think about the precision a good leadcore fisherman has with increasing speed to rise over a hump or decreasing to go down the back. Same deal with this approach.”

These slow speeds in mind, Robertson warns anglers from using any heavier than 1-oz snap-weights. “I see guys dropping giant lead, and that’s just a recipe for snags. With a 1-oz snap-weight at slow speed, I can pull baits 2-4′ above the fish. Then every once in awhile I’ll shut off the motor to stall the planer boards for a few seconds, letting the bait stall, suspend or drop a little bit, depending on the bait.

“A lot of times, stalling your boards is the big-fish ticket. A Husky Jerk will perfectly suspend and the fish hate that,” says Robertson.

“Another bait that’s really rocking is the Reef Runner 800, which I wouldn’t normally use until later in the season – it’s perfect for getting down right into their faces.”

Anglers visiting Lake Erie should remember that bite windows can be very short during cold-water periods. “Even showing fish on my Humminbird, we might go a  couple hours and nothing, then all of sudden every rod will go off and it’s mayhem for 10 or 20 minutes. Then it’s a couple more hours of drinking coffee,” he says.

His advice: Go out prepared, and keep the maximum number of legal lines in the water for the number of anglers in the boat.

“I use Bert’s Trees for more efficient trolling spreads. Your lines don’t touch the water, spreads are farther apart and tangling almost never happens. The other thing – like salmon fishing – a bunch of baits in the water can look like a baitfish school. Plus, the more lures you put in the water, the faster you can figure out the best depth, lure, color, etc. With short bite windows, there’s no time to monkey around.”

Robertson does a couple things to find and stay on fish. First, he runs the Great Lakes LakeMaster card, paying close attention to 1-foot HD contours in the 25-30′ range that have quick access to nearby shallower spawning habitat. He labels those areas in green with the depth highlight feature on his Humminbird HELIX 12 CHIRPs.

But he says “most of my biggest fish are on those hard-to-soft-bottom transitions, which I can pretty much drive to from memory, though I’m finding new ones all the time.”

To key in on the transitions, he sets his Humminbird HELIX 12 CHIRP sonar screen to twice the depth range. For example, if he’s running in 25 feet, he’ll manually set the bottom depth range to 50 feet so he can see the second sonar return (aka “double echo”) that signifies he’s motored from soft bottom (which absorbs more of the signal strength) to a hard bottom area (which reflects the signal numerous times).

He also uses water clarity as a good indicator for finding big early-season Erie ‘eyes. “Muddy water has a lot of junk fish and a poor strike zone. Gin-clear water is often a few degrees colder and serves more as a fish highway. But chalky water? That’s baitfish and cafeteria mom territory. Game on!”