Rapala’s got a killer arsenal of baits made for calling fish in. All pull fish through the ice, but knowing which one to tie on when will for sure help you to catch more (and bigger!) fish. > Tony: “Early ice in particular, you get a fair amount of young-of-the-year die-off, so those fish will really be keying in on Jigging Raps…they fall with an erratic swimming motion that matches the struggle of those minnows.

> “It’s a fantastic bait for early-ice, but also when fish are really aggressive throughout the season in the daytime hours…I’ll go to more natural colors: blue chrome, silver and perch. In stained water I will use UV colors.

> “Even when you drop it on a slack line, it’s going to kind of pendulum out, swimming outside your sonar cone and darting back…gives you a wider jigging action than any other bait out there…a cat-and-mouse kind of feel.”

> “Rippin’ Raps often draw more bites at dawn and dusk, or in really stained water. They’ve got a rattle that can help those fish hone in on your bait, and this is when your UV colors are key — it’s like a beacon in the night.”

> “Later in the winter…when they’re really not willing to go outside their strike zone to hit something, that’s where I like to fish more up-and-down presentations like the Rippin’ Rap.

> “The Rippin’ Rap bite really heats up when we’re fishing a little deeper and the fish are somewhat suspended…I’ll fish it a lot higher in the water column than I would a Jigging Rap.” 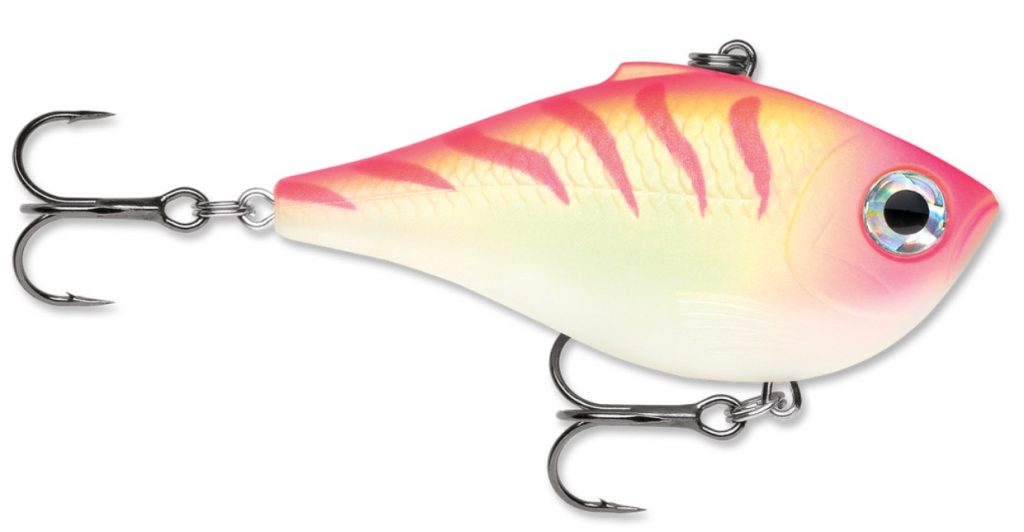 > “When they’re really keying on Rippin’ Raps or Jigging Raps, but just won’t fully commit, a Slab Rap’s a great alternative. It has a real slow, subtle fall, yet it still has enough action to draw fish in.

> “I really like the profile on the Slab Rap for later in the winter, for walleyes and perch in particular. It looks exactly like the young-of-the year prey they’re feeding on.

> “You can add really subtle movements without a lot of action, because of the weight…so it’s great for panfish and finicky walleyes when the bite’s a little tougher. It was really eye-opening last winter how many fish I caught on that thing.”

Tony’s got a lot more info on the subject right here.