We asked fishing hall of famer and northern MN fishing guide Tom Neustrom how he tracks down early-season walleyes — talking the first couple weeks after most “fishing openers” in the Midwest. Full scoop below to help you get into some razorbacks like this: 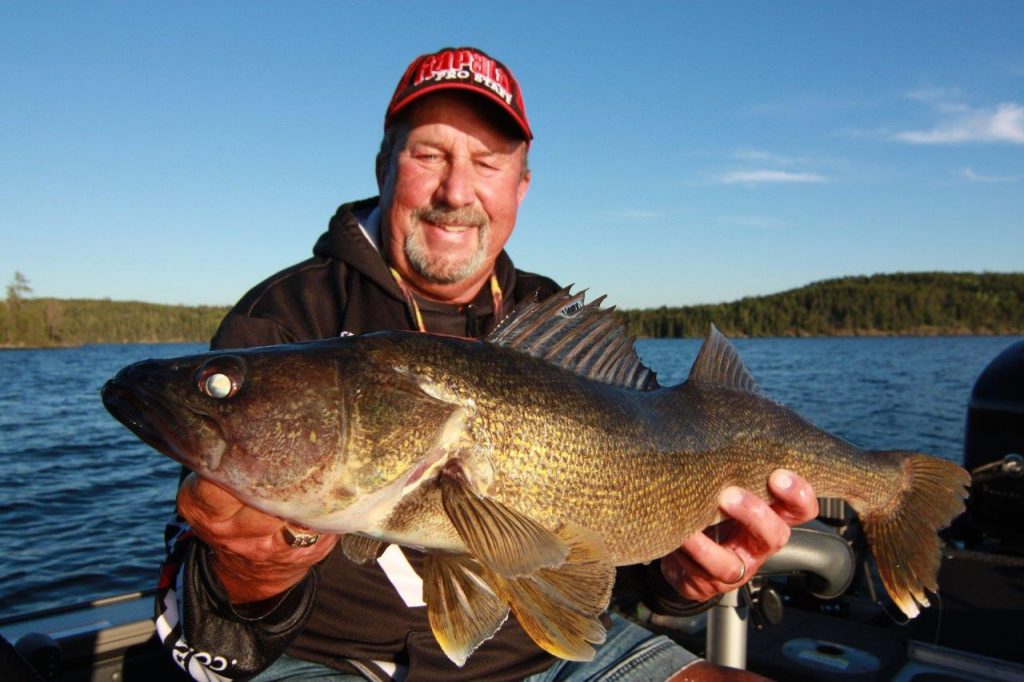 > Tom: “During this early-season period, I’ve found a jig and minnow to be the top option on lakes of all sorts, and in all sorts of conditions. At this time of year, you find walleyes between the shoreline and the first major breakline to deeper water. Look for areas where the slope is not too steep.

> “For years, we tended to fish along shorelines where the wind had recently been beating. But after a lot of experimenting, I’ve found that not to be true in many cases. But I’ve found that it’s easier to fool shallow walleyes in water that’s murkier due to wind or current. Fortunately, the process of ice-out tends to stir up lake sediments and the shallows are cloudier than later in the season. That makes it easier to sneak up on walleyes. If you’re fishing a super-clear lake, it’s critical to be very quiet and make long casts to avoid spooking fish.

> “Walleyes remain in that shallow zone because of the abundance of baitfish there, as well as its relative warmth, compared to the depths. Keep an eye out for birds feeding too, especially loons or gulls. If you see activity, head in that direction.

> “Walleyes like to hold shallow — but near the break — so they can move deeper quickly when cold fronts come along. When a front hits, we start marking fish in 16-20’. You can still use a jig and minnow to catch them, just increase jig weight up to 1/4-oz.

> “I like to cast instead of dragging a rig or jig. That allows you to define the depth preference of walleyes more easily and it tends to keep folks thinking and active, not just holding onto the rod.”

> “The key to catching shallow walleyes is presenting the jig and minnow in the most natural fashion possible, so we use 1/16-oz jigs, upsizing to 1/8-oz if it’s a bit breezy or deeper.

> “Walleyes can be lethargic after the spawn, and the water is still chilly as well. My favorite jig for this situation is the VMC Neon Moon Eye Jig. It’s pill-shaped so it falls easily and actually fishes heavy for its weight, due to its slim profile. The key is to present it with a subtle lift-and-drop action.

> “Some anglers have a hard time learning the jigging motion required for this technique. In that case, I have them use either a split-shot rig (1/8- or 3/16-oz split shot) with a hook and lip-hooked minnow on a #2 VMC Octopus Hook, with just enough weight to gently fall. A light slip-sinker rig works, too.

> “The best rod for these livebait techniques is a 7’ medium-power spinning rod with a soft tip. Walleyes will start to load the rod when they bite, so a stiff rod doesn’t work. Simply raise the rod to set the hook and the battle is on!”

Want to see more stuff like this? Sign up for the FREE Target Walleye emails — packed full of fishy goodness and sent straight to your inbox twice a week: