You might remember me mentioning the coming-this-winter VMC Moon Tail Jig in our new walleye and ice fishing stuff from ICAST (part 1) a few weeks back:

Looking at those pics ^ I assumed it had the same head design as the VMC Neon Moon Eye Jig, but with the TechSet Technical Locking Hook that comes on the VMC Sleek Jigs…but I was way off….

Snuck out chasing ‘eyes with Al Lindner on a local lake the other day, and he had a box of those VMC Moon Tail Jigs with. Politely asked if I could dive face first into that box and get my creep on lol. Was totally one of those [mind-blown emoji] moments when I picked one up — the head shape is completely different than I expected.

Snapped a few side-by-side pics (both are 1/4-oz jigs) of some different angles so you can see what I’m talking about: 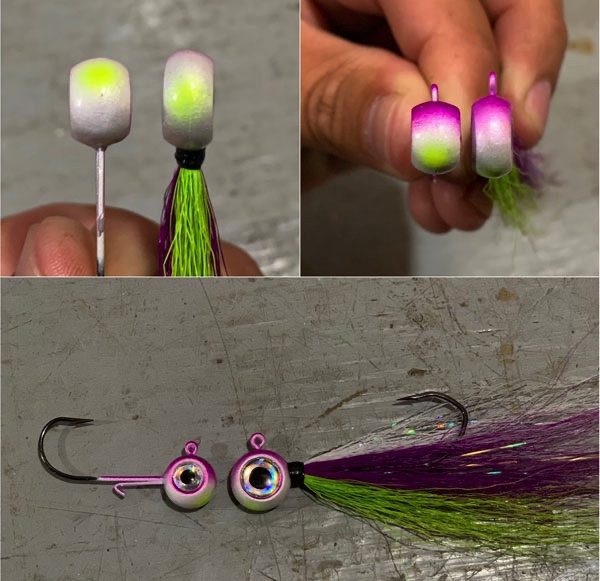 > “If you can imagine taking a jig and putting it in a vice and flattening it out, that’s what they did.

> “…have the same weight, but it’s thinner so it cuts water much faster. You get a better, faster drop speed.

> “You make the profile much bigger. And the eye becomes gigantic. And the bigger the eyeball, the more the walleyes like it.

> “They cast like a bullet. You can throw them right into the wind with no problems.

> “I’m throwing up on some shallow-water stuff with it, you can back-troll with it, it works phenomenally well on deep-water structures. You could rip through the weeds with these jigs. You can do things with them that you couldn’t do before. And that’s the idea of the Moon Tail.

I threw one a little bit the other night in shallow weeds — am absolutely loving the way it fishes so far! — but had to cut it off after catching a snake pike…’cuz I only have 4 of ’em right now and I wasn’t about to lose 25% of that to a slimer LOL.

Can’t wait to get out and fish it on a non-pike-infested lake soon-ish. Keep you posted….