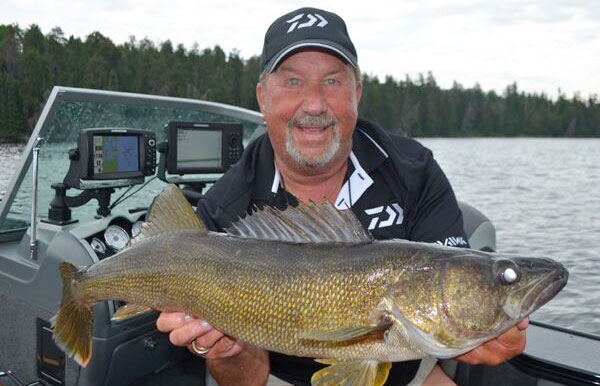 Non-stretch braided lines were introduced and quickly assimilated into the fishing arsenals of anglers.  With much fanfare and ads extolling their advantages and benefits, they gained immediate traction. But, monofilament still serves a purpose and in fact in certain circumstances out-produces braided lines.

He said most mono in 6- or 8-pound-test is best for jigging walleyes in 15 feet of water or less. “I feel Sufix Elite is the best of all mono lines I’ve ever fished,” he said. An early November guide trip this fall on Lake Winnie in water no deeper than 10 feet proved his theory once again.

Using 1/8-oz jigs, he and one angler using mono were up 9 to zero over the third angler (a really good “stick”) using braid. After the score rang up to 12 to 0, the “braid” man pleaded for a mono rod. With that rod in hand, he caught six walleyes in 15 minutes, and became a believer.

Tom has spent a lot of time watching jig movement underwater. With mono, he said, “The motion of the jig is more of a slide-drop” rather than “a quick snap like with braid” – like the jig is flowing up and gliding down as opposed to the rapid up/down action with braid. “It definitely has a different action that walleyes prefer,” he said.

He says mono is his “number one choice in about 70 percent of all fishing applications.”

When he uses braided line

When is Tom on the braid bandwagon? He uses it almost exclusively when pulling crankbaits over flats.  He ties on a fluoro leader in clear water, but just uses braid direct in stained water.

He also likes braid when casting cranks, but he doesn’t set the hook: He just reels down and pulls back (no hard hook-set) to keep from ripping hooks free.

In both instances, he uses rods with soft tips, and the trolling rod is always an 8-footer.