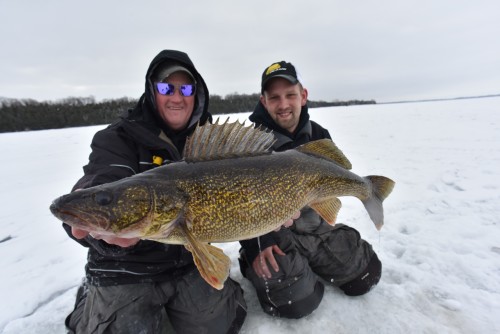 As of Monday, Feb 22, Sturgeon Bay guide Bret Alexander says the ice on Door County, WI’s Sturgeon Bay is in good shape, at 15-20” in most places. “The water that was on top of the ice froze, and we’re headed into a cold snap. Ideally, we’ll be ice-fishing through the end of March. It’s been a good year. We’re getting trophies but a lot more small- and medium-size fish, too. Lots of year classes.”

Hitting the fast-forward button, Alexander urges ice anglers to concentrate on the shallow stuff for the last few weeks of ice. “Most guys will be in that 15-30’ we fish mid-winter, but I like to slide into shallow bays like Riley’s, Little Sturgeon Bay and Sand Bay and pound that 5-8’. That’s where the really aggressive walleyes are in the mornings and evenings.”

Why do they get so shallow? To eat, pure and simple. Pods of fish will be staging for the spawn, with a vector toward shallow, gravel-laden areas or creeks that extend into marshy backwater areas. “Walleyes are drawn to that moving water, like the creek mouths in Sand Bay. A lot of walleyes will move up the creeks and spawn. But you’ve got a lot of rock spawners near shore, too.”

That said, shallow water near shore “is the place to be” during the last couple weeks of ice. Good thing, too. Fishing decaying hardwater is best done by hoof – ideally with a buddy and ice-safety tools like picks, a throw rope and PFD. Conveniently, a lot of good, fishable areas aren’t far from public launches, easements and places to park.

In terms of presentation, Bret says it’s a “power game.” He and his clients have the best success hole-hopping with large #7 and #9 Jigging Raps, with a preference toward glow hot perch, glow yellow perch, perch, silver fluorescent chartreuse and any of the Glow Tiger patterns. “There are a lot perch in the bays during the end of the year, so anything that resembles that does well. Pearl white has been good this year, too.”

Bret is a fan of the biggest Jigging Rap made, the colossal 3.5″ #9. “Moves a lot of water and visually gets their attention. I’ll put scent in my corner, too, by pinching an emerald shiner right in the middle and impaling it to the bottom hook. A lot of times you can actually see the walleyes come in and attack in the clear, shallow water.”

He works the plus-sized ‘Raps with more pronounced vertical rips to call in active feeders. “When I’m out deeper, I’m making 1-foot rips. In shallower, I’m ripping 2 feet or more for bigger sweeps of the bait in the shallow water. Gets those aggressive fish really going, and can incite the tentative fish too.”

Alexander recommends sizing up to medium-heavy rods, 10-lb Sufix 832 Advanced Ice Braid and a 12-lb fluorocarbon leader. “The thing I like about the braid, even though we’re not in deep water, the water drains nicely from the line. Your line and guides stay pretty much ice free.”

When a lot of the Ice Belt isn’t fishable or walleye regulations prevent it, Door County’s Green and Sturgeon bays offer some great late-ice opportunities. But like the the rest of the country, they’re at the mercy of the weather. “Best to call ahead or visit us on Facebook to find out what’s going on,” says Alexander.

But know this: Even if it warms quickly and the ice goes fast, early open-water fishing in and around Sturgeon and Green bays can be equally awesome.