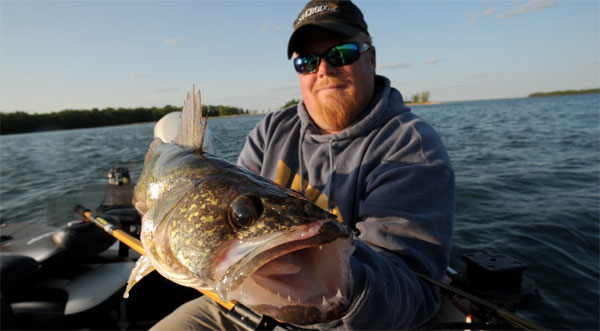 On the natural lakes of the upper Midwest, walleyes typically spawn in depths of 1-4′ over gravel bars, mixed gravel and sand flats, then when they’re done, they drop off to the edges.

But “where they go next isn’t necessarily deep,” says Minnesota guide Brian “Bro” Brosdahl. “Male walleyes will linger near the spawning sites, and females will slip out into 4-12′.  Some will slide farther down the break, but they’ll still move up mornings and evening to feed.”

He prefers cabbage weeds, which draw a buffet of bait – perch, shiners, crayfish, darters and more. “May through July I’m watching my Side Imaging for scattered areas of emerging cabbage weeds, which may be nothing more than foot-wide isolated clumps of inch-tall stuff, but hold food.

“Also look for larger weed flats along upper and lower food shelves, and soft-bottom areas – that’s where most of the weeds usually grow. Your 2D sonar will show weeds too, but looking right and left of the boat with Side Imaging gives me a more comprehensive idea of the layout, and I spook fewer fish by maintaining my distance. I’ll find pockets, outside points, funnels and areas where vegetation extends past the pronounced weedline. Then it’s just a matter of dropping waypoints.”

Then he casts from the bow, inching his boat forward, staying a long cast away from waypoints.

“On larger weed flats I’ll actually offset the contour nearest the weed growth with I-Pilot Link and dial the speed back, pitching Gami jigs tipped with a spottail shiner. I like spottails because they’re native to most Minnesota waters, but golden shiners, a leech or a ‘crawler can work great, too.

“For the smaller clumps, I’ll engage Spot-Lock or drop the Talon and really work the area hard,” says Brosdahl.

Experiment with jig cadence. Sometimes snapping a jig really fast draws an instinctive strike. Other times a slow drag or letting it fall to the bottom with a short lift works best.

“For short-biters I like a Fire-Ball jig head with the addition of a stinger hook. The stinger is so light that if you let it hang free, walleyes can suck it in better,” he says.

On some days Bro casts cranks, but says he prefers spinnerbaits for early-season ‘eyes.

“I just love pitching spinnerbaits over new weed growth. Most anglers think they’re just a bass or pike bait, but – especially on prairie lakes – they’re deadly and I can cover new waters fast.”

For a similar power-fishing approach but on a smaller scale, he attaches a simple hairpin spinner to a jighead and threads on his favorite walleye plastic.

> Once you get a few bites, it comes down to boat control, especially in the wind. “You may only find fish on one scattered clump, so it’s precise pitching. That’s where the Talon and Spot-Lock really give you an advantage. An traditional anchor will work too….”

> “Bro has another tip for windy conditions – reducing rod length to minimize drag while maximizing sensitivity. “I’m using shorter 6′ 0″ or 6′ 3″ St. Croix rods with a thin-diameter braid and fluorocarbon leader, which still allows me long casts with shorter rods.”