[Editor’s note:  Do you know of a non-pro walleye angler with interesting tactics that walleye nuts need to know about? If so, drop us a line at walleyenuts@targetwalleye.com – we’d love to hear from you!]

Vicki Tennant is not your typical walleye expert. But with 30 years of experience fishing Lake of the Woods, she knows thing or two about catching marble eyes…big ones, too.

I met with the Orion, IL native at ON’s Witch Bay Camp, which she’s been visiting for weeks at a time in either July or August since the early ‘80s.

“In 1983 my husband Glenn heard about Rapala Shad Raps, at that time only available in Canada. We stopped at a shop, bought one, and fished for a week and a half at Witch Bay and caught a ton of walleyes.

“On the last day we lost it to a rockpile. After that, let’s just say we bought as many as we could find and fished them hard.”

In those days, Vicki says she and her husband started targeting LOTW rock humps that came up to 5-6’ to match the depth curve of those original Shad Raps.

“We’ve tried a lot of colors and at certain times, all of them work. Firetiger is a brilliant color on LOTW. Later down the road it was great to put new Shad Rap models to work, all of which dive to different depths.

But her secret bait? #9 Rapala Tail Dancers or Reef Runners with an interesting DIY mod, but more on that later.

“A lot of people have touted that we’re only out for big walleyes. But for us, it’s simply a more active way to catch them than jigging or pulling bottom-bouncers. Just seems like there are often bigger fish in the shallows where we fish.”

Her 14-year-old grandson, Wesley, nods his head and smiles.

Vicki: “We go out through French Narrows and cast over the humps for big fish. Typically we explore a new area of LOTW each year, running 20 miles just for curiosity’s sake. We look at the maps in the winter and say, this area looks neat.”

Wesley: “Like the rock hump I found that goes from 20’ to 4’, but there weren’t any fish on it…looked good on the map, though.”

Day in, day out their mid- to late-summer pattern involves finding 5-15’ rock humps, which they cast from various angles.

“We stay just off the hump and cast big Husky Jerks, Reef Runners, or better yet, the Tail Dancers,” Vicki says.

She pays close attention to preferred color, size and retrieve speed, and uses 10-lb braid on spinning gear or 10-lb mono on baitcasters.

Sometimes she tips the back treble with plastic, but what’s proven most effective are Tail Dancers that feature her unique DIY mod: a small Colorado- or Indiana-style blade affixed to a split ring and barrel swivel, and soldered to the rear treble hook: 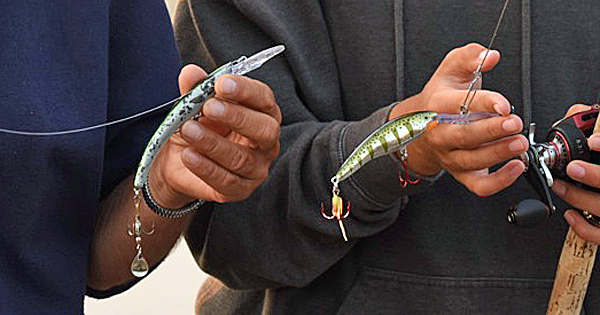 The combination of Tail Dancer wobble and added rear flash and vibration has proved so deadly that fellow Witch Bay guests call it  “The Tennant Pattern.”

My immediate thought was the pattern would have application well beyond LOTW, like Green Bay, as well any natural lakes with high-topping rock islands and reefs.

But it doesn’t stop with Vicki merely tying on the near-magical bait. She insists every angler in her boat use a different color, paying attention to what color and retrieve speed begins catching the most fish. Then they all switch to what’s working.

“If you’re not banging rocks and losing a few baits, you’re not doing what it takes to catch big walleyes this way,” she says.

The best years for the Tennant Pattern have been those that are “so stinking hot and glass calm that you can literally see walleyes in 5-10′ over those humps.” But it produces year after year no matter the conditions.

Vicki has done much of her own fishing exploration, and hasn’t missed a single season at LOTW’s Witch Bay Camp in 3 decades. She says she “fishes hard” but finds that it’s “a pleasant break from farming.”

She’s also introducing the next generation to walleye fishing – looks like she has Wesley hooked: 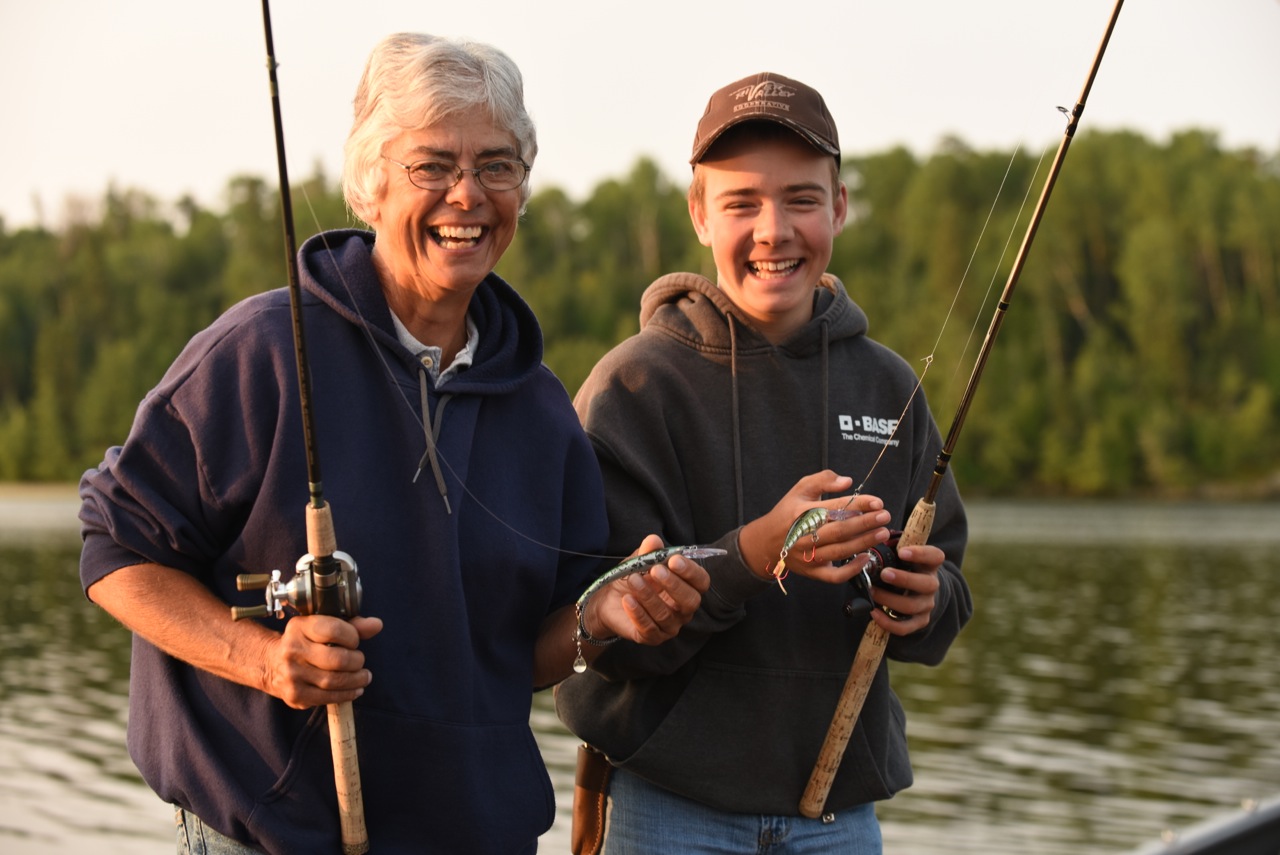