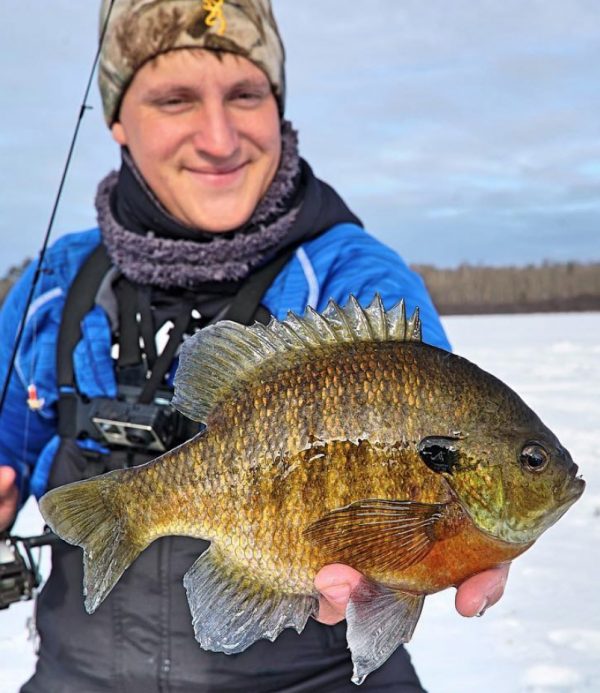 Fishing the same lakes each time out can get a bit stale…plus you’ll probably never stick that new PB (personal best) if you’re pokin’ around the same community holes day after day!

TW fam Will Stolski tracked down a couple of ice-heads who love breaking down new-to-them water — and do it frequently — to get their take on where to start….

Still not sure how he got Sam “Sobi” Sobieck on the phone…dude is ultra-busy [!] and on the road 24/7. Sobi’s a videographer/vlogger/fishin’-maniac who’s fished, well…almost everywhere…but grew up hitting central MN.

Sobi had Murray Hebert (FishNmore Outdoors) riding shotgun when Will called, who tossed in some bonus snippets as well. #DoubleWhammy

With all the available mapping sources on the interwebz, there’s really no reason why you shouldn’t be doing your homework before ever drilling a hole. That extra 30 mins of research can save you a bunch of time in the long run:

>  Sobi: “The first thing I look for when checking potential water is if there’s any streams/rivers that flow in or out of the lake?

> “A lot of these smaller bodies of water are shallow, so having some kind of oxygen source from rivers/streams is crucial to avoid a winter-kill scenario…which are fairly common in the areas I fish.

> “Before I even look at a contour map of the lake, I check out ‘satellite’ shots on Google Maps. On a lot of these smaller lakes, the contour maps are vague or unavailable. You can tell a lot about a lake (deeper water, shallow reefs, emergent vegetation) just by looking at satellite images.”

> “Definitely take advantage of fishery surveys done by the DNR if they’re available. Most of my fishing is done in MN, so I’m lucky to have access to a pile of data via [the free] LakeFinder tool.

> “The surveys help give me an idea of what I should expect as far as different species plus the kind of forage they’re feeding on…beats the heck out of going in blind.”

LakeFinder is probably one of the biggest not-so-secret secrets of diehard ice-heads. Can search most any lake in the state (by name, or searching the map on the mobile version) and it’ll kick out tasty info like:

1. Whether there’s a public access or not, and where it’s at.
2. Fish stocking info: when, what and how many.
3. Water clarity, quality and levels.
4. And my personal favorite…the DNR’s trap/net data.

That trap/net data (under the “Fisheries Lake Surveys” tab) breaks down the weight and length of all fish sampled by the DNR. It’s a KILLER tool for finding lakes with above-average size fish…right from your couch [zipped-mouth emoji]: 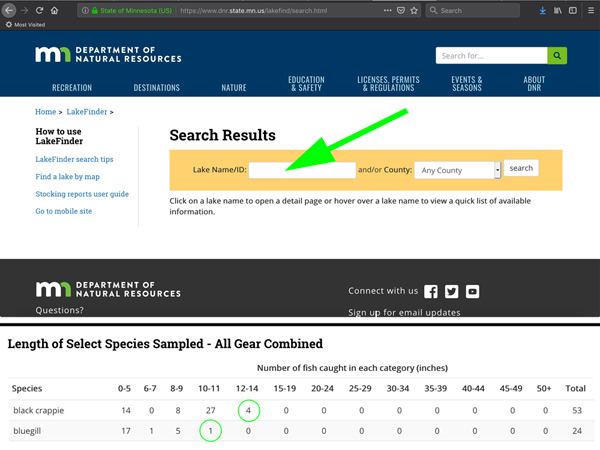 Don’t be afraid to fish lakes that sampled very few (or zero) of your target species…might not catch as many, but the ones you do could be the right ones.

Found a new lake you wanna hit…now where to start??

> Sobi: “It’s easy to jump the gun and start ripping holes, but the first thing I do is gauge the physical landscape around the water.

> “Steep banks? Probably deep-water close. Points coming off land? Odds are they extend into the lake. Little stuff like that can help eliminate water, especially if contour maps are minimal/unavailable. 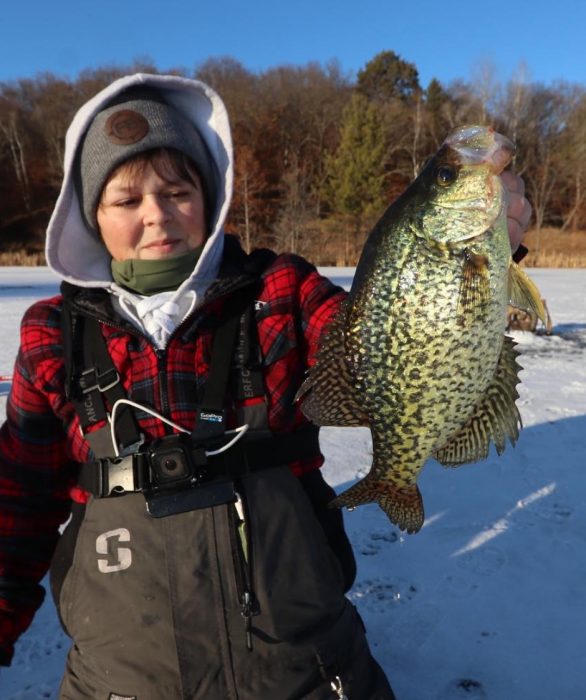 > “Start shallow then move deeper. The first thing I look for is green weeds — if you have access to an underwater camera, use it. No biggie if you don’t…throw a jacket over your head and take a peek for yourself.

> “I honestly think that physically checking weed beds is the most overlooked aspect in the game…there’s so much you can learn visually: what kind of weed growth, how thick, bare patches, green or dying, etc.

> “If the good stuff is there (cabbage, coontail, or milfoil) I’ll drill a zig-zag pattern of holes both in the weeds and right on the edge. Think of it as following the outside weed-line like you would in the summer.

> “Doesn’t matter what your fishing for…everything likes to live around healthy weeds.

> “If weed growth is poor — or they have totally died off — I’ll start to drill out deeper. Not drilling the basin immediately, but looking for pinch points close to deeper water. Specifically inside turns, points and sharper breaks.”

> Sam: “Start bigger then move smaller…sounds a little backwards, but when fishing a new lake I want to find those aggressive fish and only downsize if I have to.

> “I like to start off with a 5-mm Frostbite T-Series tungsten jig for panfish. Clear water = natural colors. For darker/stained stuff I go with something that really stands out. The ‘Hulk’ color from Frostbite has a purple body with green + black accents…looks totally different than most jigs on the market.”

> “Always start with plastics before switching to live bait…it’s way more efficient and cold hands suck. My go-to is the Dragonfly.

> “For walleyes or pike: I’ll start with a rattlebait or jigging spoon. I like rattlebaits ‘cuz there’s no need to bait ‘em…same premise as targeting pannies, start bigger then go smaller.”

Hitting new lakes can be frustrating! Odds are you’ll strike out a lot (probably 9 times out of 10) but that next hidden gem down the road could pay off with a true jaw-dropper: 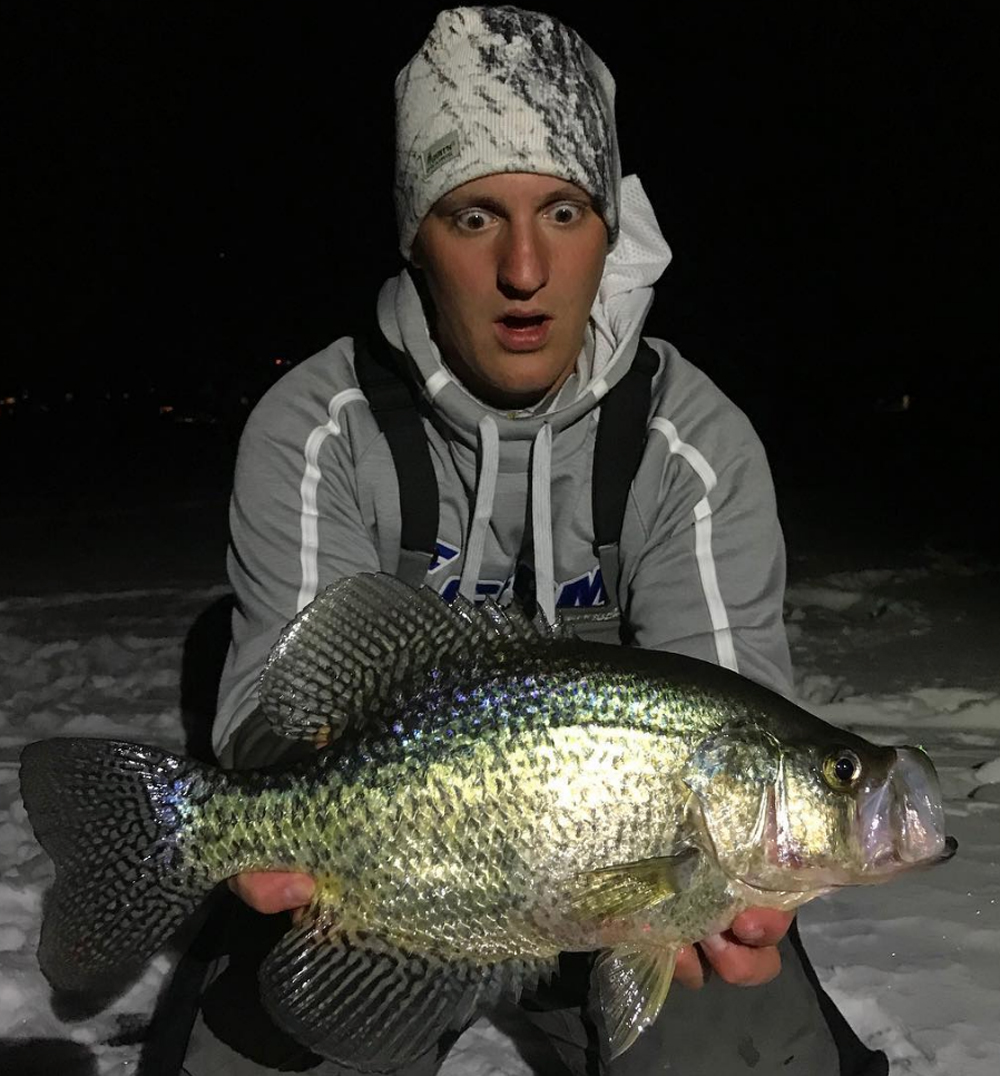